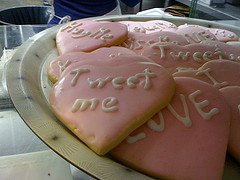 Airlines and cable and satellite TV providers show the lowest levels of satisfaction among the American public. Anyone who has been subjected to lost luggage, surprise fees, or generally unresponsive service, will probably agree. The real surprise is that the next lowest level of satisfaction — barely above the other two — comes from social media platforms.

Digital Transactions brings us some perspective on the issue, based on a report that has just been released:

… [T]he social-media category, though growing rapidly, is a flop when it comes to pleasing users, according to Foresee Results, an Ann Arbor, Mich.-based research firm that tracks the effectiveness of Internet businesses. Using data from the American Consumer Satisfaction Index, the firm says social-media sites generated an aggregate score of 70. That’s almost dead last among measured categories, with only airlines and subscription-TV services scoring lower, with both categories at 66. By contrast, Internet merchants scored 83. Measured for the first time this year, the social-media category ‘has the lowest industry aggregate score of any of the e-business or e-retail industries measured by the ACSI,’ says Foresee’s report.

This would seem to be counter-intuitive to some, but, as someone who works in that field, I am constantly hearing from clients (both individual and corporate) about their dissatisfaction with the platforms. The social aspect is something most love, but the nuts and bolts of how it works generate amazing levels of frustration at times. According to Digital Transactions:

Facebook, in particular, shows poorly in the satisfaction measurement, with a score of 64, barely ahead of MySpace’s 63 and well behind the top-scoring site, Wikipedia (77). Foresee says it analyzed those sites that attracted the most traffic and commanded the most market share. Google Inc.’s YouTube logged a 73, while all other sites measured came in at 72. Out of the 30 online companies the ACSI measures, Facebook and MySpace finished 29th and 30th, according to the report. ‘Any way you slice it, Facebook and MySpace turn in an abysmal performance,’ the report notes.

Now, I work with Facebook a lot. You can get a huge amount of reach out of it, but working with it can rapidly devolve into a nightmare. One good example is working with Facebook pages and groups. A nonprofit I work with had built a Facebook group to promote its annual conference, only to find that a Facebook page was really what it needed. Pages are much more visible to search engines, have the ability to harvest interaction metrics, and, in my opinion, have much more ability to go viral.

Once the Facebook page was built for the aforementioned nonprofit company, and we had gotten most of the members of the group to “Like” it, it was time to take down the group in order to prevent confusion. That’s when the fun began. There is no “Delete group” button. Instead, you have to manually remove every member of the group, getting a confirmation window to click through each time, and then have the last Admin leave once everyone else is gone. As you might imagine, this is an irritating process when you have several hundred or several thousand group members. And yet, despite these sort of obvious omissions, Facebook just passed the 500 million user mark.

Then there is the fact that the rules seem to change almost daily. Digital Transactions reports:

That performance is due to the sites’ increasing efforts to find ways to generate revenue through marketing and advertising, and from frequent changes to the user interface they present, according to Foresee. By presenting ads based on user behavior on the site, the companies offend more and more consumers who were attracted to the sites as non-commercial forums, the firm concludes. ‘They’re stepping into the social space [with ads],’ says Larry Freed, president and chief executive of Foresee. ‘You’re marketing to me based on watching what I do. It approaches the creepy side.’

Freed is far from the only one who finds advertisers’ use of social media to often be a bit Orwellian. It is a truism of social media that people do not want to be “sold.” The people and organizations that find success in using social media are the ones that focus on providing value, and allowing that to attract inbound business. Newsblogs are a great example of this, in my opinion. By providing pertinent, on-topic information on a regular basis you can attract readers and earn their trust. Then, when a need for your services comes up, they will probably think of you first, since you have already provided good value.

In the meantime, much like their cable TV counterparts, social media platforms in general get away with a very low level of satisfaction due to the fact that “everyone is using them.” Facebook may be annoying to work with, but it is still the number-one traffic driver for news-oriented websites, even surpassing Google. (For more info check out the recent SixEstate Survey: Finding and Consuming Information With Blogs and Search.)

Freed does not believe that the clunky and inconvenient nature of current social media platforms will adversely impact their transaction potential, and I have to say that I agree. Despite the numerous, well-publicized privacy problems Facebook has experienced, I know of very few people who have stopped using it.

What do you think? Will these platforms change in response to the low-satisfaction ratings, or will they follow the airlines’ example, and just keep losing your metaphorical luggage?