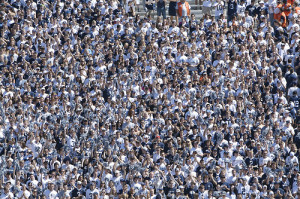 It’s always helpful to examine what large companies are doing to incorporate social media into their marketing plans. Here’s a list of some recent successful attempts.

* American Express offered the “ultimate, VIP Glee fan experience” exclusively via Twitter, where the TV show’s cult-like fans have a large presence. More than 250,000 people clicked on a tweeted link for another contest for AmEx’s co-sponsored Conan O’Brien tour. Last year, AmEx did another exclusive Twitter campaign, for Bon Jovi concert tickets that sold out within hours.

* Papa John’s is conducting an exclusive Facebook campaign, inviting its 1.2 million fans to enter a contest to name and create their own pie to be sold at the pizza chain. Profits up to $10,000 will be shared with the contest’s winner. Jim Ensign, vice president at Papa John’s, said, “[Facebook] allows our fans to tell their friends what they’re doing. Facebook spreads the news.”

* PepsiCo is also getting its consumers in on the development action. Its new social media campaign invites its nearly 850,000 Facebook fans to create, name and market a new Mountain Dew flavor. Three finalists have been selected, and will be on sale beginning June 14. Fans can then vote online for their favorite. “If we let [our fans] play a role in the product creative process, we’ll engage them,” said B. Bonin Bough, global director of social media.

* Virgin America announced the airline’s Toronto expansion exclusively through Twitter and offered a 50 percent discount for 500 travelers. The offer sold out within three hours. The company also recorded its fifth highest sales day in its history the day the Promoted Tweets went live. Virgin America’s vice president of marketing, Porter Gale, estimates the resulting free media exposure to be worth $10 million. Gale said, “You have to try to use your message authentically and create it as an organic extension of existing conversations on Twitter.”

* Bravo TV hosted an Earth Day-related game on its website and its Promoted Tweets to publicize it hit 300 re-tweets (the maximum allowed) within a couple of hours, and got 200,000 impressions in one day.

A Twitter representative, Sean Garrett, won’t yet comment on Promoted Tweets’ performance specifics since they are still in the development phase.