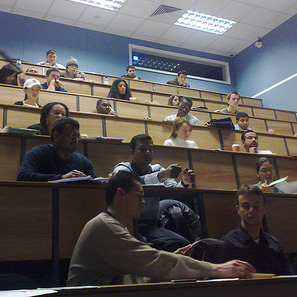 Chris Evans is director of the student media program at the University of Vermont where he writes a blog on journalism. He’s also written for daily newspapers in cities across four different states, so he’s learned about the media industry through firsthand experiences.

In an article for Suite 101, Evans stresses the fact that journalists new to the field and those still in j-school will need a wider set of skills than industry veterans. Journalists now need to be Internet-savvy and good at multitasking. Media jobs are dwindling, yet publications are ramping up their web presence.

Evans cites tips from a fellow blogger, Ryan Sholin, who writes about journalism and media at Invisible Inkling. Sholin is also the Director of News Innovation at Publish2, a site that focuses on collaborative journalism. Although the particular entry that Evans references is from 2007, many of the tips are still relevant three years later.

Some of them include:

In a more recent blog post, from October of last year, Sholin’s biggest piece of advice is to blog. “[M]aintain a Web site where you write on a somewhat regular basis,” he writes. Sholin also says, “Become an expert at one analog craft and one digital craft.” The digital skills are all of those things referenced above, and by “analog craft,” he means something like copyediting, photography, or media law.

As the competition for media jobs grows, your best bet is to make yourself the most marketable candidate you can be. The need for multimedia journalists will only get bigger.