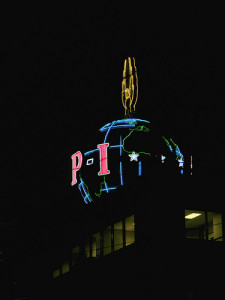 Part of the transition was reducing a staff of 160 to only 20. Three name brands from the previous incarnation were kept on the payroll: Pulitzer Prize-winning cartoonist David Horsey, sports columnist Art Thiel, and Joel Connelly, a political columnist with 37 years at the Post-Intelligencer, who took a pay cut in order to stay aboard. Connelly and other writers for the publication had found that after the transition they were now allowed to cover topics outside of their usual beat. The writing staff doesn’t manage to cover it all, however. In the Los Angeles Times piece, James Rainey writes:

The new PI can’t afford to be comprehensive. It doesn’t really try to be authoritative. It no longer offers routine coverage of county government, for example, but highlights felines in the cutesy LOLcats feature and misses no turn in the saga of Amanda Knox, the University of Washington student tried for murder in Italy.

The Post-Intelligencer doesn’t necessarily need to be comprehensive, however. It exists in a city where the Seattle Times continues to print on a daily basis, as well as other online-only publications, as Rainey explains:

In the last three years, the city has seen the emergence of a pair of nonprofit websites, Investigate West and Crosscut, that produce deeper public service and investigative journalism. A new online for-profit, PubliCola, has scored political scoops. And the neighborhood-centric region has spawned a giant school of hyper-local blogs — many published at Seattlepi.com.

Along with the professional writers, amateur journalists are also invited to contribute to the site. The publication offers regular training sessions for citizen journalists, including search engine optimization (SEO).

Although the Post-Intelligencer celebrated the one-year anniversary of its new incarnation, it is still not profitable. It has maintained its web traffic, though, and claims an average of 4 million unique visitors and 40 million page views a month.

“The 24-hour news cycle can be breathless and tense. Maybe we don’t get enough time for reflection,” said Connelly. “But on the other hand, we are part of a bold experiment to perhaps be part of a model for the business in the future.”

Source: “An e-model for journalism in Seattle,” Los Angeles Times, 03/20/10
Image by alexfiles, used under its Creative Commons license.