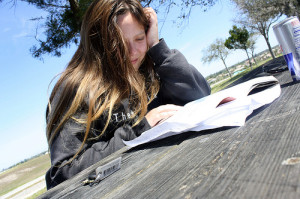 Print media is a waning facet of the journalism industry since the printing process can’t keep up with the news, so it should come as no great shock that the industry is not adequately served by printed textbooks either. The period between writing a textbook and publishing a textbook is often a year — if not longer — which is fine for subjects such as history or mathematics whose topics don’t change too frequently. For a course such as college-level journalism, however, that length of time can mean a textbook is outdated as soon as it reaches a student’s hands. Right now, journalism is a rapidly evolving industry, one that cannot accurately or adequately be addressed in printed textbooks.

One might think that social media and the other bright and shiny tools of the current world of journalism are intuitive for newer college students, but that’s not necessarily true. Although this year’s incoming college freshmen are older than the Internet, the newer generations of journalism students are behind the curve on understanding new media’s potential.

Alexa Capeloto and Devin Harner are assistant professors of English at John Jay College of Criminal Justice/City University of New York where they direct the journalism program. In a piece for PBS’ Mediashift, the duo describe their students’ trepidation at incorporating social media like blogging, Twitter, and YouTube into coursework. Capeloto and Harner write, “[A] few students said that they didn’t see blogs as journalism, because anyone could do them.”

Similarly, college students are still surprisingly hesitant to embrace e-textbooks. Sales in the e-textbook market are reportedly still in the single digits at U.S. universities. According to Simba Information, e-textbook revenue will account for just over 11% in all higher education and career-oriented textbook sales in the next two years, or just $585.4 million. Industry growth is hindered by high prices of both devices and titles, copyright issues, rentals that expire after a certain time period, and platform fragmentation.

Platform fragmentation remains yet another impediment to e-textbook adoption. As the four major digital textbook publishers — Cengage, Pearson, Wiley, and McGraw-Hill — push for more dynamic experiences stuffed with audiovisual content, the question of platform support becomes increasingly relevant. Will an e-textbook work on your Kindle as well as your laptop? Will it be accessible from the HP Touchpad you picked up on the cheap? Do you have to have an open Internet connection to access the material? Depending on the e-textbook vendor, these answers vary, and they’re not always clear up-front.

Mindy McAdams, a journalism professor at the University of Florida and author of the blog Teaching Online Journalism, thinks that online modules could be the key to keeping journalism course materials up to date. In McAdams’ vision, experienced journalists would be paid to create and update the modules. In a similar vein, there are projects such as Nieman Journalism Lab’s Encyclo, released just a couple of months ago and described as an “encyclopedia of the future of news.”

In another piece for PBS’ MediaShift, Capeloto writes,

Imagine reading a book chapter about journalism’s watchdog role in American history. Then imagine sprinkling that reading with video of President Nixon’s resignation speech, the Supreme Court’s judgment in the Pentagon Papers case, or an exchange with fellow students about whether it’s worth going to jail to protect a whistle-blower’s identity.
Now — and here is the part that most intrigues me — imagine the publisher updating that chapter to include WikiLeaks and the new levels of access to and scrutiny of our government that it represents.

Mark Briggs, author of the digital journalism textbook JournalismNext, is finishing up work on his next textbook, Entrepreneurial Journalism, to be published in October. Since he is covering an emerging field, he found it difficult to keep his material current. “At some point you have to say, ‘That’s it. Ship it’ — and hope for the best,” says Briggs.