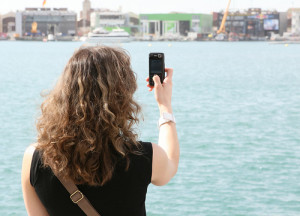 CNN’s coverage of the Japanese earthquake and subsequent tsunami helped the TV station draw its highest audience numbers in months. Part of that success is being attributed to the integration of eyewitness contributions from its citizen journalism project, iReport. There are currently roughly 750,000 iReporters who contribute content, including video, photos, and text.

Dr. Ron Ross, co-founder and “Catalyst-in-Chief” of the National Association of Citizen Journalists, comments on the surge in CNN’s crowdsourced content in a piece published on Big Journalism. Ross writes specifically about the news organization’s coverage of the disaster in Japan:

My wife and I found it far more riveting to watch the citizen reports — most of which were without commentary — than it was to listen to over-energized anchors report nearly the same thing that was reported in the previous half-hour.

CNN is expanding iReport with a new experiment called Open Stories. The new project was announced at the South by Southwest (SXSW) festival last month. The experiment is currently in beta, including Open Stories on SXSW and the Japanese earthquake/tsunami disaster.

In a post on the CNN iReport Blog, Lila King, CNN iReport producer, explains the project’s genesis, inspired by the March 11 earthquake:

A story like that is the kind of event that’s impossible to view through just one lens — it affects millions of people, and has as many angles as people involved. That’s why at CNN iReport we’ve recently launched a new kind of approach for telling these kinds of massive stories: the Open Story. It combines iReports with reports from CNNers, and places them all on a map and along a timeline. And, of course, it invites contributions and comments…What we’re working toward here is a true collaboration among a news organization and the many people who experience an event first-hand.

Open Story interlaces amateur submissions with professional content, with the latter being clearly labelled. According to King, an Open Story includes:

CNN’s Royal Wedding coverage plans are detailed in a post on the CNN Press Room blog. An Open Story for the upcoming Royal Wedding between Prince William and Kate Middleton will launch on April 22. As part of its promotion, CNN held a contest to send one U.S.-based iReporter to London to cover the nuptials. Don’t bother entering the competition now, however; Sunday was the deadline for entries. Contestants were required to submit a 90-second video explaining why they should be chosen. The winner will be announced sometime this week.