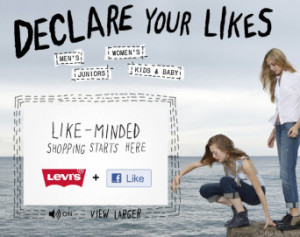 A roundup of news items from the past week:

* The Nielsen Company conducted 14,000 surveys evaluating 238 brands, 412 products, and 951 ad executions, and discovered that online video ads are more effective than TV ads with U.S. viewers. Ads that appear within streamed TV shows online could receive more attention because the audience is usually more attentive to their monitor than to their television screens during viewing. The study also found that TV ads repurposed for online use outperformed videos created specifically for digital use.

* Levi’s recently revamped website is one of the early adopters of Facebook’s new social plug-ins. Among other things, the company has inserted a “Like” button next to every piece of merchandise. When a shopper clicks that button, it will then be noted in his or her activity feed. Christopher Heine at ClickZ reports that “the ‘501 Dark Aged’ jean style has yielded around 700 ‘Likes’ in the last week. Levi’s has picked up 14,000 ‘People Who Like’ on Facebook during that same span of time, taking its total to nearly 294,000.”

* Facebook is running into some strong criticisms with the launch of its new social web tools. Part of the launch is the “Connected Profiles” option, which links a user’s current city, alma mater, favorite books, movies, etc., to Facebook Pages. Any unlinked information will be removed, which means users who opt out entirely will have a completely blank profile. This leads to privacy concerns, too. As Sarah Perez at ReadWriteWeb reminds us, a Facebook user’s list of Pages is public information — which means you can no longer hide certain information on your profile, unless you eliminate it altogether.