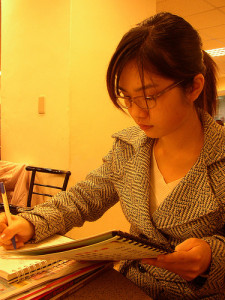 The Online Media Awards (OMAs) aim to provide a level playing field to recognize excellence on the ‘net. To provide balance, many of the categories for the inaugural awards allow for entries based on the number of a site’s unique monthly visitors. This should alleviate the problem found with some awards for online reporting, such as the Online Journalism Awards, that seem to only recognize the larger brands like The New York Times, NPR, and MSNBC.com.

The OMAs were launched by The Drum, a print magazine and website devoted to news about advertising, design, media, marketing, digital, and PR. Mark McSherry, one of the judges of this year’s competition as well as an editor and NYU communications professor, described what he will look for when examining the entries:

I’m looking for content that is entertaining, educational and informative and content that is designed and presented in a way that engages the reader, whether it is written content, video, film, sound, or all of the above. To entrants, I would say this — by all means show me that you are using new and social media digital distribution to full effect, but also show me that what you distribute is worth distributing. The story is still the thing.

The list of McSherry’s fellow judges for the 2011 Online Media Awards includes a myriad of fellow editors, journalists, and other media types. Entries will be accepted on the OMAs website through February 11.

There is a more looming deadline for the Women Entrepreneurs in the Global Digital News Frontier program. Submissions for these three $20,000 grants from the International Women’s Media Foundation (IWMF) must be received by November 30. The grant program from the 20-year-old IWMF is “designed to diversify the emerging digital news media landscape by expanding the voice and role of women entrepreneurs.” Applicants must be U.S.-based female journalists.

Meanwhile, for inspiration, you can check out The Business Insider writer Cooper Smith’s recent compilation of “The 6 Hottest Journalism Startups of 2010,” which includes comedy news site Splitsider, women’s interest site The Hairpin, and food and drink site The Daily Meal.

[T]he verdict is still out on who can develop an efficient, yet effective content model at the hyperlocal level, but some promising new startups think they have what it takes. Furthermore, among the new class of online publications are those who are staying away from reporting news all-together. Rather, they have developed niche sites that satisfy a void in content previously unavailable. The biggest determinant of these successes will be whether there is enough public interest in the genre.

Start blogging & tweeting if you don’t already. Don’t over think this. Your blog posts don’t need to be Shakespeare — just do minimal viable blogging. Document your startup adventures, thoughts on tech, respond to others blogging/tweeting — whatever. Just get out there and write.

Unfortunately, where there are beginnings (startups), there are also endings, as evidenced by the folding of The Washington Independent (WI). The award-winning site, launched three years ago, will begin mirroring content from The American Independent on December 1 rather than publishing its own original content. WI editor Aaron Wiener explains:

WI was not just a journalistic experiment; it was also a financial one, and ultimately, the successes of the former couldn’t sustain the strains of the latter. […] The crisis in the world of journalism today isn’t really about journalism — it’s about the bottom line. Reporters and editors everywhere are trying to find a way to keep their very good work alive.