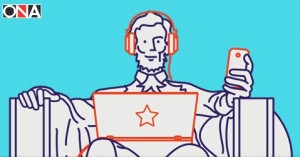 One of the new awards, the Gannett Foundation Award for Innovative Investigative Journalism (Large Site), was presented to The New York Times for its “Toxic Waters” series. The Small Site version was awarded to ProPublica, The Times-Picayune in New Orleans, and Frontline for their collaborative investigative series, “Law and Disorder.” ProPublica received an OJA at last year’s ceremony for General Excellence. The site’s director of communications, Mike Webb, said that since then, ProPublica has expanded to do more complex partnerships, such as those on the “Law and Disorder” series. “Being received by your peers is as high an honor as you can get,” said Webb. “We want to keep doing great investigations that really have meaning and impact lives.”

National Public Radio (NPR) won the third new award, for Outstanding Use of Emerging Platforms (i.e., tablets and mobile devices) for NPR Mobile. NPR also won the Gannett Award for Technical Innovation for its application programming interface (API). According to Mallary Jean Tenore, who covers mobile media for Poynter Online, Kinsey Wilson, senior vice president and general manager of digital media, “said NPR initially struggled to find its voice online but that ‘the mobile space is a natural for us. We really hit some home runs in the last year.'”

[Our] entry pointed to the site’s effort to cover the economic crisis through the prism of a single town and its citizens (http://www.elkhart.msnbc.com); its Stimulus Tracker (http://Stimulustracker.msnbc.com), which allows users to follow federal stimulus spending down to the county level; and its extensive coverage of the plight of amputees in the wake of the devastating Haitian earthquake (http://haitiamputees.msnbc.msn.com/).
The site also published distinctive original content — from a blog devoted to science and space (http://cosmiclog.msnbc.msn.com/) to a franchise that advocates on behalf of consumers (http://redtape.msnbc.com/) to a destination source for politics (http://firstread.msnbc.msn.com). In other efforts, msnbc.com reported on the White House’s grudging release of visitor logs (http://www.msnbc.msn.com/id/32087532 ) and offered a Daily Dose of myth-busting of health insurance overhaul facts (http://www.msnbc.msn.com/id/38974924/ns/health-dose_of_reality).

CNN.com won for breaking news, for its Haiti earthquake coverage and also won best blog reporting for its technology coverage. For its acceptance speech, the site played a video through an iPad. The Toronto Star won the large site award for the same category.

“In my opinion, 2010 will be remembered as the year that grassroots independent news sites took off,” said Lisa Williams, one of the OJA judges and CEO/founder of Placeblogger.com. The Community Collaboration Award went to WestSeattleBlog.com, marking the second year in a row that a Seattle neighborhood site has received this recognition.

The OJAs first launched in May 2000 and are administered by the ONA in collaboration with the University of Miami’s School of Communication. Six of the awards presented are accompanied by cash prizes, totaling $33,000 and funded by the Gannett Foundation and the John S. and James L. Knight Foundation. A complete list of this year’s award recipients can be found on the ONA website. In addition to the awards banquet, the ONA conference also included sessions and workshops on various topics of importance to online journalists.