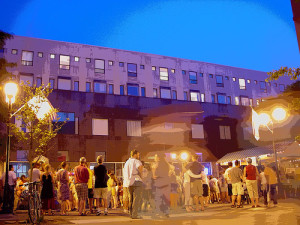 I recently cited a readership survey from the National Newspaper Association (NNA) that found readership for local print newspapers remaining steady. Mark Lecesse, a journalism professor at Emerson College and blogger for The Boston Globe, reports on the newspaper’s Gatekeeper blog, however, that “[w]hile the national dailies are doing all right, the regional and local dailies are getting killed.”

While the three national newspapers have emerged as a category to themselves over the course of several years, the strongest category in journalism at the moment is online local — or, to use the buzz word, hyperlocal — news.

The rise of hyperlocal sites is not new information. We’ve been reporting on this growth on the SixEstate blog for a while now. Just look at AOL’s Patch, which has grown from just 30 hyperlocal sites to over 600 in just a year’s time. The network hadn’t even reached 100 by August 2010.

Growth for hyperlocal sites will only continue, for a myriad of reasons. Pekka Pekkala, who has a lengthy career in journalism and has worked in online journalism since 1997, also researches sustainable business models at USC Annenberg. Last month, Pekkala wrote an article for The Online Journalism Review about the “death of syndication” and how it’s good news for hyperlocal sites:

Internet is built on the idea of having just one copy of everything, accessible to everyone. If you produce those original pieces of content, no need to worry. If you’re in the business of aggregating others content, prepare for a rough ride. […] Concentrate on the original content instead of copying; create the one copy only you or your organization can create.

Local television is experiencing growth as well, with a resurgence of about 25% in revenues over the last year. Advertising spending from the automobile industry alone is up 74% on local television compared to a year ago. Cory Bergman, a heavy contributor at “social TV” blog Lost Remote, writes:

[L]ocal TV stations in many markets now have more journalists on staff, combined, than the major daily newspaper. And as the world of network and syndicated programming becomes more clouded, local TV stations will ramp up production of new local programming — across multiple platforms — to fill the gaps. Meanwhile, the lines are blurring between TV video and web video, bringing the industry into a new world of web-enabled social TV. […] While the job market certainly is still tough, there will be emerging opportunities at the best stations for web-savvy, social-native multimedia journalists[…]

With burgeoning local and hyperlocal news and predicted increases in online advertising spending over the next four years, one of the issues to focus on will be how to tie the two together. In other words, how can hyperlocal news sites get their piece of the online ad dollars?

Robert Niles, who has extensive experience with Web news and crowdsourcing reporting, wrote a piece for The Online Journalism Review with ideas for building local advertising market share. For inspiration, he looks at rising star Groupon, purveyor of daily deals and discounts localized to major markets in the U.S. and Canada. His suggestions are how to one-up Groupon, however, including better targeting.

And isn’t a more relevant experience exactly why hyperlocal sites have become so popular?

Source: “The Future of Newspapers: National and Hyperlocal,” The Boston Globe‘s Gatekeeper blog, 01/04/11
Source: “600 Sites!,” Patch official blog, 12/15/10
Source: “Why the death of syndication is great news for hyperlocal and niche sites,” OJR: The Online Journalism Review, 12/14/10
Source: “Local TV making comeback, not so much with newspapers,” Lost Remote, 12/20/10
Source: “How to do better than Groupon in building local advertising market share,” OJR: The Online Journalism Review, 12/22/10
Image by Brian Glanz, used under its Creative Commons license.