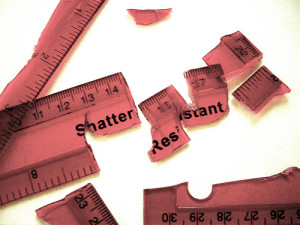 Gina Chen, a veteran newspaper journalist, wrote a guide called “10 ‘Journalism Rules’ You Can Break On Your Blog” on her own blog, Save the Media, last March. Despite how quickly things change with technological progress, Chen’s list is still relevant nearly a full year later. Even bloggers who cover the news (rather than less serious topics) are allowed to break the rules, according to Chen. “In fact,” she writes, “I’d argue the best bloggers break them regularly because blogging isn’t a news story; it shouldn’t read like one; it shouldn’t look like one.”

1. You don’t have to wait for the full story.
Post the information that you have at the time, then update and revise as necessary. Of course, you should remain transparent about any changes made to a blog post once it’s been published. (See #4 below.)

2. You can have a personality.
How much personality you inject into your writing depends on the tone and purpose of the blog, of course. You wouldn’t want to get too silly on a corporate blog, for example.

Even when you decide that it’s appropriate to express yourself in the blog, make sure your personality does not overwhelm the topic. Is the blog about horseracing, beer brewing, stamp collecting (or whatever), or is it about you? (Hint: Most people don’t want to read about you.) Still, a blog that merely regurgitates facts without showing some sort of character will get boring pretty quickly.

You can also write in first person more often and, as shown in this very sentence, in second person. Chen writes, “[B]logs are meant to be conversational and very close to the reader.”

3. Hyperlinks are your friend.
Obviously, there is no “journalism rule” specific to the use of hyperlinks; it’s something that has no counterpart in traditional journalism. The great thing about online journalism is that you don’t necessarily have to get every factoid into a single blog post. This saves you from needing to write the entire backstory, especially when it’s something you’ve already covered or have been continuously covering on the blog. You can also link to other websites and blogs that offer more explanation on the story you’re writing.

4. Transparency is key.
It’s tempting to take advantage of the editing ease of blogging. One quick edit-and-save can erase an embarrassing mistake you made when you originally published the story. The best practice is to be completely transparent about any changes you make to your published items, however.

I believe you should note if you edit a blog after it is posted unless you’re just fixing a minor typo. One way to do that is to use the cross-out function as in: Sam Smith Smythe, and then note that you edited at the end of the post. For an update that changes facts, I’d be even more transparent. ‘Earlier I told you about a mom accused of biting her son’s principal on the ankle, but I’ve since learned the bite was on the elbow.’

Her advice about addressing criticism and opposing viewpoints is also right on point. Chen regularly covers the relationship between traditional media and new media on Save the Media and also writes for Harvard University’s Nieman Journalism Lab blog, which examines the impact of the Internet on the future of journalism. You can also follow her on Twitter (@GinaMChen).

Source: “10 ‘Journalism Rules’ You Can Break On Your Blog”, Save the Media, 03/20/09
Image by It’s Life, used under its Creative Commons license.