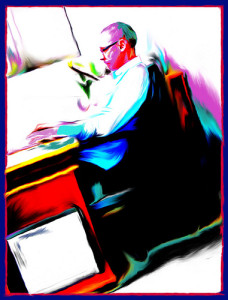 Pew Research Center‘s Project for Excellence in Journalism (PEJ) published a new study on May 9 entitled “Navigating News Online.” For the study, the nonpartisan “fact tank” looked at audience statistics from the Nielsen Company, then examined the top 25 U.S. news websites. PEJ was interested in four questions regarding trends in online audience behavior:

Not surprisingly, Google remains the primary traffic director to news sites, accounting for a little less than 1/3 of all visitors. Facebook ranked second or third for five of the news sites studied, including The Huffington Post, AOLNews.com, MSNBC.com, Topix, and The New York Times. According to the study, “These percentages represent only a fraction of the traffic coming from Google. But they make Facebook an influential and probably growing force.” Not surprising either.

What does raise an eyebrow, however, are the statements in the report that Twitter “appears at this point to play a relatively small role in sharing of links to news sources” and “barely registers as a referring source.” According to Nielsen’s data, Twitter only referred enough links to register to just nine of the sites, and only accounted for 1% of traffic to most of them. (However, The Los Angeles Times received more than 3.5% of its traffic from Twitter, which is more than it received from Facebook at 2.05%.)

One of the problems with the Nielsen data and PEJ’s analysis, however, is that only Web-based Twitter referrals originating from www.twitter.com were counted. Readers coming in from third-party applications, like TweetDeck, or from mobile apps weren’t included. PEJ explains the omission by writing, “Even if these third party applications were counted, however, the percentage of total traffic sent to a top news site via a Twitter-based link would still be small, especially in comparison with the traffic that comes through Google or to the news sites directly.”

This near dismissive attitude is not being missed by industry experts. Steve Buttry, director of community engagement and social media for Journal Register Company, comments on the oversight on his personal blog. He also highlights other shortcomings he finds in the study. Some of the exclusions he noted are traffic from tablets and other mobile devices (e.g., iPad); traffic on work-based computers, since Nielsen focused on home-based machines; links from blogs; and useful data about local news sites. Buttry also writes,

The study’s authors reflect significant bias by regarding the exact same percentage as trivial or significant in different contexts.

Findings from the study also show the Drudge Report, although a small operation, is an influential traffic driver. Its numbers outrank Facebook in half of the top 25 sites analyzed. The other sites which were noted for referring substantial amounts of traffic were all either aggregators, search engines, or social networks. The list includes Yahoo (Yahoo News and Yahoo Search combined), Reddit, StumbleUpon, and Ask.com (formerly askjeeves.com).

The study also analyzed what it calls departure sites, or where users go when they leave a news site. Topping the list, in ranking order, are:

The report explains that the latter is “not the search engine or news aggregator that sent people to the site in the first place. The Google component accessed in these instances is Google the service provider. Users in these cases are accessing tools powered by Google such as a map attached to a piece of content or screener questions often attached to email sign-up pages.” Another finding is that ad click-throughs are pretty dismal, and their linked pages barely even register on the list of departure sites.

Finally, PEJ had this to say about the importance of home pages:

[S]ome of the traffic coming from search is people typing in the name of the Website, not searching for specific topics. … [I]t suggests that, for certain sites especially, going online to check the latest headlines is still an important dimension of news consumption.