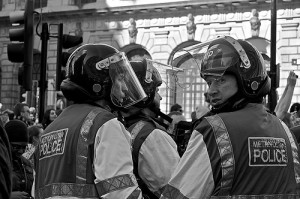 Jules Mattsson, a teenaged freelance photojournalist, is the subject of many current discussions on freedom of the press thanks to an encounter he had with police officers on June 26. Mattsson was attempting to photograph an Armed Forces Parade in Romford, England, and was instructed by the officers to stop. The confrontation eventually escalated into Mattsson’s camera being confiscated because he was “a threat under the Terrorism Act,” and the Metropolitan Police officers allegedly pushing him down a set of stairs and then detaining him until the parade’s end.

“I was told by the police I was breaching the terrorism act, public order act, various misc. copyright and child protection laws and otherwise being an ‘Agitator’,” writes Mattsson on his blog. The majority of the 191 comments on Mattsson’s blog post show strong support for the teen’s composure during the incident, particularly for his insistence that the officers cite the particular law they were enforcing. Mattsson was then told a number of incorrect claims by the officers. Jerome Taylor of The Independent explains:

Under laws that guarantee the freedom of press in Britain, there is no restriction on photography of children, police or armed forces in a public space. There is new legislation to protect the identities of some police officers but only those working undercover or in instances where an officer genuinely believes a photographer is collecting data for terrorist purposes.

At one point, one of the officers even says, “We don’t have to have a law.” Such incidents have apparently been a recurring problem in the U.K. The British Journal of Photography (BJP) has written a string of articles about similar encounters. Even a photojournalist for The Independent was stopped for taking a picture of the House of Parliament. BJP, Amateur Photographer, and other supporters maintain that the stop-and-search measures of street photographers are an abuse of “Section 44” powers, so named for Section 44 of the Terrorism Act of 2000.

The day before the Romford incident, photojournalist Marc Vallée and videographer Jason Parkison were given £3,500 each plus legal costs and an apology from the Metropolitan Police. In December 2008, the team was covering protests in front of the Greek embassy in London when the Met tried to confiscate Vallée’s camera and physically removed the duo from the area. The statement of apology read, “The [Metropolitan Police] confirms its recognition that freedom of the press is a cornerstone of democracy and that journalists have a right to report freely.”

Mattsson is reportedly considering legal action against the Met. A video that he has made is embedded below and consists of audio from the Romford incident that he recorded on his mobile phone and photos that he took before the officers intervened.

Source: “Police remove teenage photographer from parade, citing terrorism act,” Journalism.co.uk, 06/29/10
Source: “The Romford Incident,” Jules Mattsson’s blog, 06/28/10
Source: “Officers claim they don’t need law to stop photographer taking pictures,” The Independent, 06/28/10
Source: “Young photojournalist detained for army cadet pics,” British Journal of Photography, 06/28/10
Source: “The Met’s apology to journalists is only of value if it acts upon it,” The Guardian, 06/26/10
Image by Steve Punter, used under its Creative Commons license. Note: Image is not of the same police officers described in the above incident.

Rachelle Matherne has over 17 years of media experience, including print journalism, online journalism and broadcasting. She also has over a decade of experience in online publicity.