The Many Ties of Brian Williams 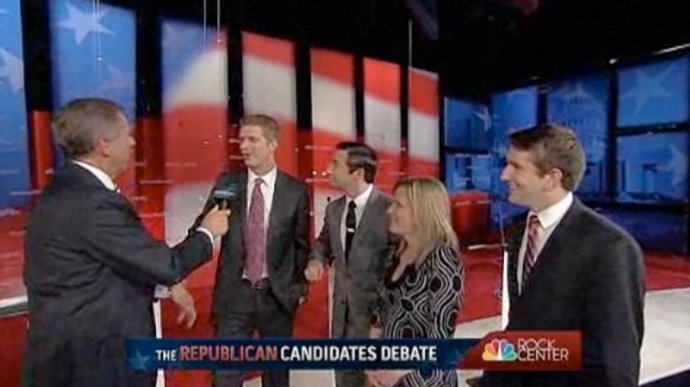 A SixEstate reader noted, “The other night, Brian Williams snuck in a 20-second pitch for an acid reflux remedy. I believe it was, in fact, a product placement, not news.”

Compared to some of the other things that transpire, this is a big fat “so what?” Who cares if a suit on TV engages in the occasional bout of covert commercial advocacy? Except, as anchor of “NBC Nightly News,” Brian Williams is “seen by more U.S. television viewers on a daily basis than any other individual.” And since he is also managing editor of his news program, The Buck Stops Here should be on a placard over his desk, as it was over the desk of Harry S. Truman.

A Matter of Trust

Williams has won more awards than Carter has pills — another old saying that was itself an early, if unconscious, instance of product placement. In 2007, TIME magazine named Brian Williams one of the 100 most influential people on the planet. There is, in short, a trust issue. If homeboy were raking in illicit swag, in return for his numerous gratuitous mentions of products and companies, it would be a matter for concern. Because, could the public place an ounce of faith in anything he says about anything?

The newsman has been connected with the concept of stealth advertising for quite a while. Back in 2005, George Simpson of MediaPost asked the simple question:

Can I trust that Brian Williams is wearing that tie because his wife bought it for his birthday, or because the ‘product placement department’ ordered him to wear it?

In the fullness of time, another newswatcher came along and started a blog whose content consists of descriptions and attempted decodings of every item of neckwear in which Brian Williams has ever stepped before a camera.

More significantly, a fed-up news consumer and blogger named Norman Charles has devoted an online career to tracking the news anchor’s habit of sneaking references to advertisers’ products into everything. This charmingly monomaniacal blog is called The Nightly Daily, and Charles says of its origin:

Brian Williams’s hidden agenda (to shamelessly promote himself, his broadcast, his sponsors and other NBC shows) motivated me to begin submitting comments to his blog at msnbc.com. Their refusal to print most of my comments led me to start this blog.

In the profile section, Charles gives his interests as:

He provides example after example of inappropriate coziness between news staff and corporate interests, such as stories about:

And then there is negative advertising, i.e., taking a swipe at the competitor. Charles says:

On the Aug. 26 Nightly News, Brian read a ‘news story’ about a recall of Johnson & Johnson hip replacement implants. Once again, this story was planted on Nightly News for the sole purpose of helping Smith & Nephew — a regular sponsor who also make artificial hips… Brian’s obvious goal was to steer people away from J & J artificial hips and towards those made by Smith & Nephew.

The Porous Wall Between Advertising and Editorial

These are all Nightly News advertisers that someone on the broadcast (usually Brian) has gone out of their way to plug in a ‘news story’ […] Nightly News is one big product placement repository! Virtually every night, Brian (or someone else on Nightly News) goes to great lengths to plug a product that regularly advertises on the broadcast.
Nightly News correspondents are often required to mention one or more sponsors in a story just so that the producers have an excuse to put the sponsors’ logos up on the screen (Walmart is a frequent beneficiary of this practice).

Of course, Charles is not the only one who has noticed Williams’s propensity to lavish faux-news credibility upon advertisers. Carrie Martens, in an article about a sandwich franchise’s incredibly persistent and ubiquitous product placement, voiced this opinion:

… [W]hatever you think about product placement, you gotta hand it to the Subway folks. They really know how to get it done. I’m half expecting to see Brian Williams eating a Subway footlong while delivering the Nightly News.

Interviewed by Williams aboard Air Force One in October, President Obama spoke of his confidence in the ability of women to make their own decisions after consultation with their families and clergy, and without the involvement of politicians. Despite the President’s clear words, viewers seemed eager to find occult meaning in the fact that the publication Women’s Health was visible in his magazine rack. It seems the mere presence of Williams can inspire suspicions of foolery.

The News Show Named After a Sponsor

In October, a sassy website called Chickaboomer discussed the Republican candidates’ debate and remarked on an aspect of the reportage, as Williams chatted with “political embeds” (is that a euphemism for “exploited interns”?). Was the mention of an MSNBC “Morning Joe” sponsor a product placement or an fortunate accident? Here is the quote:

Williams (grammatically correct but awkward): ‘What is the number one consumer product on the road without which you cannot do?’
Chick embed: ‘Absolutely coffee! Preferably Starbucks. Uh, you know, Grande Skim No Water Chai.’
Williams: ‘I thought you were going to say an iPhone or something.’

Something to Help That Gag Reflex

Getting back to that acid reflux segment, there was no breaking news in the story. No one had mentioned this medical device in the news for months. Yet here is the entire transcript of Brian Williams’ 20-second soundbite, twice endorsing the product (our emphasis added) via hearsay. This is the entire transcript of the news segment — ask yourself if this sounds like news or a pitch:

Something new from the world of medicine. What’s being called a kind of tiny magnetic bracelet implanted at the base of the throat. It is shown to greatly help patients with acid reflux. The magnets help to make weak muscles close, cutting off the reverse flow of stomach acid. Some patients say the surgery has been a panacea for them. The Art of Plastic Surgery is greater every day.

Here is a paragraph from Charles, concerning one of Brian Williams’ stock performances that he loves to hate:

Next, it was time for another alarmist health-scare story. This one was about the link between sleep apnea and cancer. The message of this story: If you snore or don’t feel rested after sleep, you’re going to get cancer. Like the ‘Air Scare’ story earlier, these alarmist stories keep viewers from changing the channel because we want to find out if we’re going to die soon. As usual, this story also had an alarmist title: ‘Cancer Risk?’

Some people wonder why “NBC Nightly News with Brian Williams” even has a health segment. Should health stories that often impact only a small portion of the viewing audience edge out hard news stories? The program doesn’t have a regular sports segment, even though a roundup of sports scores would likely draw greater interest than health news. The reason for so many health segments should be obvious.

In a paper titled “Explaining Attitudes Toward Direct-to-Consumer Advertising (DTCA),” researchers Stephen Ceccoli and Robert Klotz examined who is advertising on “NBC Nightly News” and discovered that 41% of all ads were for pharmaceuticals. When beauty aids, dental care, and dietary supplements are added, the total is over 50% of the ad time for health-related ads. See Dental Implants for more information.

During the 2012 flu season, no one was more aggressive pushing flu shots than NBC News Chief Medical Editor Dr. Nancy Snyderman, who came to “NBC Nightly News” from advertiser Johnson & Johnson. In February 2013, at the end of flu season, Brian Williams aired one more segment on the subject, stating that “the flu vaccine has actually been a dismal failure,” preventing Type A flu in those age 65 and older only 9% of the time.

“NBC Nightly News” is not unique in sacrificing editorial integrity for ratings or revenues. What is surprising is the number of people who still think NBC News — or any major news provider — is an objective source.