In February, The New York Times announced a partnership with New York University to produce an online news initiative covering the East Village of NYC. The collaboration is called The Local: East Village (LEV) and is supposed to launch sometime this fall.

According to a press release from The New York Times Company:

The Local East Village is one of several collaborative journalism efforts The Times is exploring with news and academic organizations. In March 2009, The Times announced a similar alliance with the City University of New York Graduate School of Journalism for The Local Brooklyn site, which serves the residents of Fort Greene and Clinton Hill at NYTimes.com/fortgreene. In Chicago, The Times publishes a local edition with news provided by the Chicago News Cooperative, an independent, non-profit newsroom; later this year, the Bay Area News Project, a San Francisco-based non-profit newsroom, will begin providing news for the Bay Area edition of The Times. 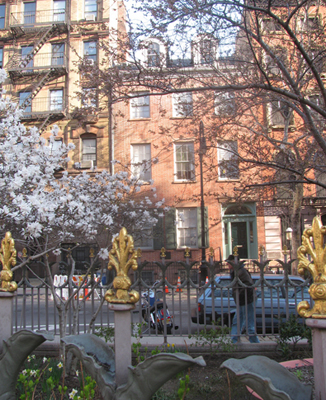 I learned about the LEV from an NYU student, who was involved in the project, at a conference last month. As a former resident of Greenwich Village myself (I just moved to Brooklyn last week), I’m fascinated by the initiative and look forward to following its progress.

Most of the information available on The Local: East Village dates from February, when the announcement was made; but we’ll report new information as it becomes available. It seems like much of the infrastructure for the LEV is in place — students, professors, workspace, online assets, etc. — but many of the details, including monetization and payment structure, are still being worked out.

Jay Rosen, NYU journalism professor and director of the Studio20 program, is one of the developers of the LEV project. Rosen breaks down the resources each institution is bringing to the collaboration on his blog PressThink:

The Times is providing: the publishing platform including the servers, editorial supervision, the nytimes.com url, other tools and data sources available to its various blogs, and, of course, inspiration, reputation and a standard of excellence recognized around the world. NYU is providing: the editor’s salary, student and faculty labor, offices (including a meeting space, production studios, classrooms and a location in the East Village) plus the reputation of its journalism program and the University at large.

Blair Hickman of MEDIAite adds that students from NYU’s Stern School of Business are trying to develop ways to monetize the project — which obviously will be one of the most significant factors determining the success of the program. Hopefully, more details regarding profitability and monetization will come to light after the LEV project goes live this fall.

One question I had was whether or not LEV would fall behind The Times’ metered pay wall that will launch in 2011. According to David Kaplan (Twitter: @davidakaplan) on paidContent.org:

By next year, the blogs, including The Local sites, will fall under the meter system, NYTCo (NYSE: NYT) executives told an audience at our paidContent 2010 conference on Friday. One of the challenges the company has right now is building up enough interest from readers and advertisers before the meter starts running, as some could be turned off by having to pay for access to articles.

Despite the fact that some details still need to be worked out, this is an exciting project that could have significant implications on the future of journalism — academically — as well as in practice. Rosen sums it up:

Man, it has everything in it — everything I’ve been studying since I gave my first talk to newspaper editors in Des Moines, Iowa in 1989. It’s neighborhood journalism; it’s cosmopolitan too. It’s about innovation; it’s about the classic virtues, like shoe leather reporting. It combines the discipline of pro journalism with the participatory spirit of citizen journalism. It’s an ideal way to study the craft, which is to say it’s an entirely practical project. It’s what J-school should be doing: collaborating with the industry on the best ways forward. It’s news, it’s commentary, it’s reviewing, it’s opinion, it’s the forum function, community connection, data provision, blogging — all at once. LEV I said is a start-up, but it’s starting with the strongest news franchise there is: The New York Times.