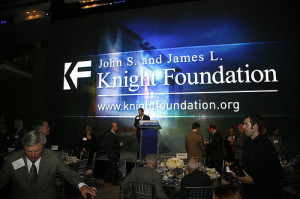 The 2010 Knight News Challenge winners were announced last week at the Future of News and Civic Media Conference, held at MIT. The John S. and James L. Knight Foundation selected 12 winners from nearly 2,500 entries from across the world and awarded them grants totaling $2.74 million.

Some of the more interesting winning ideas include:

The rules for the News Challenge are that the projects must use digital, open-source technology; distribute news in the public interest; and the projects must be tested in a local community. Many of this year’s winning project ideas focus on hyperlocal activities as the final outcome, like Local Wiki mentioned above. About the local focus of his project, Neustrom said:

Neustrom also said that one of the biggest obstacles to the growth of such an idea has been the learning curve of working with current wiki software. He and his partner Ivanov want to simplify that software. Local Wiki also involves plans to include map technology, which is also a component of several other New Challenge winners’ projects.

The Knight Foundation has been awarding these grants since 2007. We wrote about the progress of a winning idea from 2008, the Sochi Olympics Project, a few months ago on the SixEstate blog. Another site we’ve covered here before, whistleblower website WikiLeaks, submitted a proposal for the New Challenge but was rejected. Marc Fest, a spokesman for the Knight Foundation, wouldn’t comment on rejected proposals but when asked specifically about WikiLeaks, he had pointed to the three rules listed above.

Applications for the fifth and final year of the News Challenge grants will open in the Fall.