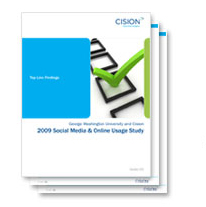 A national survey has found that a large majority of journalists rely on social media sources when doing story research, whether they publish in print or online. In fact, 3/4 of the respondents work in print media.

Among the journalists surveyed, 89 percent said they use blogs for story research, 65 percent use social media sites such as Facebook and LinkedIn, and 52 percent use microblogging services like Twitter. The survey also found that 61 percent use Wikipedia, the collaborative, web-based encyclopedia. Other sites used include YouTube, Flickr, review sites, and web discussion forums.

Reporters are also very aware of the need to verify the veracity of information they retrieve from those sites. Eighty-four percent said social media sources were “slightly less” or “much less” reliable than traditional media. The survey also found that “lack of fact-checking, verification or reporting standards” is the number one factor (49 percent) influencing that perception.

“Social media provides a wealth of new information for journalists, but getting the story right is just as important as ever,” said Don Bates, Founding Director of George Washington University’s Strategic Public Relations program, and writing and media relations instructor at the school. “As PR professionals increasingly utilize social media as a means of communicating, they have a bigger responsibility than ever to ensure the information they provide journalists is accurate and timely, provide access to the primary sources who can verify the facts, and be knowledgeable enough to provide accurate background and context.”

Bates conducted the study together with Cision, who creates and distributes media relations software. A custom questionnaire consisting of open-and close-ended questions was sent to 9,100 editors and journalists last year. Results are based on 371 responses received between September 1 and October 13, 2009.

Reporters may be adapting to social media as a research tool, but according to the survey, most journalists still rely on public relations professionals for primary research.

You can download a free copy of the 2009 Social Media & Online Usage Survey results at the Cision website.