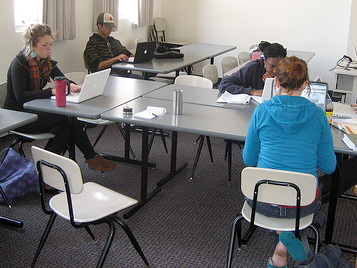 The South Florida Times is partnering with students at Florida International University’s journalism school to provide better media coverage of northwest Miami, the area known as Liberty City. The majority of media attention that section of the city receives is negative. With the new partnership, dubbed Liberty City Link, the South Florida Times aims to increase positive exposure for the community.

“We want to give Liberty City a new voice,” said Neil Reisner, a veteran journalist and the FIU professor, who will lead the 27 student journalists on their side of the project. Robert G. Beatty, publisher of the South Florida Times, says that the partnership “will yield quality journalists and quality journalism in a part of our community that is culturally rich, politically intriguing and vital to South Florida’s success.”

Story topics will include:

[… P]rofiles of family businesses and community leaders, examinations of how failing schools can be improved, after-school programs that keep young people off the streets, mentoring groups that pair people from older generations with youth and events at the African Heritage Cultural Arts Center.

Beginning March 12, the South Florida Times will devote at least one new page in its weekly print edition to Liberty City Link, and there will also be a special section on the newspaper’s accompanying website, SFLTimes.com.