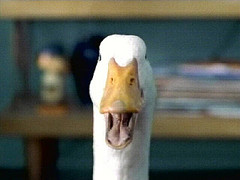 A faux pas committed while using social media can easily become the failure heard round the world. It’s one reason that many in the corporate world are still suspicious of it. It’s also a make-or-break opportunity for a brand to either humanize or distance itself from its audience. Let’s take a look at a few examples.

If you watch TV, you are almost certain to be familiar with Aflac and its spokes-duck. The duck was voiced by comedian Gilbert Godfried. Godfried had the poor taste to start cracking jokes about Japan in the midst of its ongoing series of tragic disasters.

Stuart Elliot, a writer for The New York Times, sums up the situation:

The Aflac incident began on Saturday, when Gilbert Gottfried, the comedian who supplies the voice for the squawking duck character in most Aflac commercials, started to post at least 10 jokes to his personal Twitter feed (@RealGilbert) about the earthquake and tsunami in Japan — a market that accounts for 75 percent of Aflac’s revenue.
By Monday, Mr. Gottfried had been dismissed, effective immediately.

Aflac has pointedly distanced itself from Godfried and stressed that his comments did not reflect that of the company or other employees. It remains to be seen what kind of backlash to the company’s bottom line might result.

As someone who went through Hurricane Katrina and its aftermath, I can attest to the fact that disasters cause some truly unfortunate statements to be made online (and that is an understatement). So it’s not surprising that Godfried was not the only one to choke on the subject recently.

Here are a few of the more high profile ones, courtesy of Benny Evangelista, a reporter for SF Gate:

Gottfried wasn’t alone. Rapper Curtis Jackson, a.k.a. 50 Cent, came under fire for tweets such as, ‘Look this is very serious people I had to evacuate all my hoe’s from LA, Hawaii and Japan. I had to do it. Lol.’
And then there was a YouTube video by UCLA political science student Wallace, who complained about some of the ‘hoards of Asian people’ at the school who were talking out loud on the phone in the library while she was trying to study.
She even complained about students checking in with their families affected by the tsunami and derogatorily imitated Asian languages.

Wallace is reportedly now in hiding because of alleged death threats. No news on repercussions for Jackson.

In the Chrysler case, an employee tweeted, “I find it ironic that Detroit is known as the #motorcity and yet no one here knows how to f***ing drive.” (On the corporate Twitter account.) It reached 7,000+ followers and was extensively retweeted in the moments before he deleted it. Chrysler’s response? “Our apologies, our account was compromised earlier today. We are taking steps to resolve it.”

In the Red Cross case, an employee sent a tweet through the company account that was meant for her personal one: “Ryan found two more 4 bottle packs of Dogfish Head’s Midas Touch beer…when we drink we do it right #gettngslizzerd.” The Red Cross showed a lot more social media savvy in its response, “We’ve deleted the rogue tweet but rest assured the Red Cross is sober thanks to the Manhattan Beach sober housing and we’ve confiscated the keys.”

I agree with Russell’s reaction to this on the Hearsay Blog:

Which response resonates with you? For me, the answer is simple: With the Red Cross, I hear the candid, self-deprecating, and lighthearted voice of a real employee representing the brand. I want to learn more about this person, how she made such a mistake, and how an international humanitarian organization came to hire a hardworking young woman who occasionally enjoys a few beers after work. Translation: I’m engaged.
With Chrysler, I imagine a team of stoic compliance officers, marketing executives, and lawyers being called to an emergency meeting, only to come up with a generic and vague response when they put their heads together. Their response, at best, prevents me from searching for more info on the incident and, at worst, makes me think twice about a Chrysler for my next car purchase. Translation: You’ve lost me.

That really is the important thing. Be human. Today’s audience is vastly more sophisticated, with a tendency for its members to roll their eyes at “corporate speak.” That eyeroll can easily become something much more severe depending on your response in the wake of a faux pas.

No one likes to be fobbed off with a canned reply.

Source: “High price to be paid for controversial social-media mishaps,” SF Gate, 03/17/11
Source: “When the Marketing Reach of Social Media Backfires,” The New York Times, 03/15/11
Source: “How You Respond to a Social Media Mishap Says a Lot About Your Brand,” Hearsay Blog, 03/09/11
Image by Oldmaison, used under its Creative Commons license.