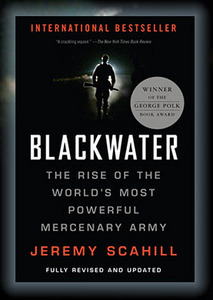 On March 24, the Park Center for Independent Media at Ithaca College announced the winner of the second annual “Izzy Award.” Independent journalist and bestselling author Jeremy Scahill is the 2009 award recipient, an honor bestowed for his efforts to bring issues about Blackwater military contractors into the mainstream media.

Byard Duncan, contributing writer and editor for AlterNet, interviewed Scahill about his views on independent media and the future of journalism. Scahill says that independent journalists are most effective when they are actually independent from people in power, whether politicians or heads of corporations. He also believes that the role of the independent journalist is to confront those in power and to give voice to the powerless.

Scahill explains to Duncan how an independent journalist must fight for access to events, even to press conferences. He describes “ambushing” political honchos at the Democratic and Republican conventions: “Literally what I do from morning till night is run around trying to track down all of those members of Congress that would never give me an interview. I find them in the hallways and back them into a corner and ask them questions that they have refused to answer when I tried to do it through official means.”

Scahill also discusses how the economic crisis has affected independent media even though it doesn’t rely on advertising as much as corporate media does. Individual and foundation donations, which support a lot of independent media, have decreased significantly — Scahill quotes a reduction figure of 40 percent. Because of the lack of funding for independent media, he says, “corporations are more dominant over newsgathering and news production and disseminating information than they’ve ever been.”

Eventually, Scahill and Duncan get on the topics of blogging and citizen journalism. Scahill says:

I think we’re at a moment where we have a lot of really good independent journalism that’s being produced by bloggers and independent journalists, but we also need to not go far away from that tradition of peer review, editing and fact-checking. We’re at a ground zero moment of how to save real journalism without succumbing to the ownership desires of large corporations or other corporate forces.

Scahill does acknowledge the fact that the media outlets that are able to ” build an old-school journalism bureaucracy” as far as fact-checking and editing are the ones with more resources, which means companies that are bigger, powerful, and have more money. “The poor are now journalists around the world,” said Scahill. “The question is: how do we fund it? How do we keep it viable? How do we keep it credible? And that is our challenge right now.”

Finally, Scahill touches on the subject that had affected his Izzy Award win: when the corporate media are forced to cover an issue because independent journalists have drummed up so much attention for it. He mentions The New York Times crediting Marcy Wheeler in a story on the Bush administration’s torture program:

They had to credit Marcy Wheeler, and put a quote from her, and cite her in their newspaper. That to me was a great moment in the recent history of independent media, because what it did was shame the corporate media. It said that a blogger with very little resources can out-scoop The New York Times on a very important story that was catching headlines at that time.
Part of what we’re doing is trying to fill the void that is left from corporate media. We either shame them, or force them to cover it, because we make it a major issue.

Scahill, a Puffin Foundation Writing Fellow at The Nation Institute, is a two-time Polk Award winner, and a regular contributor to The Nation, Democracy Now! and AlterNet. His book, Blackwater: the Rise of the World’s Most Powerful Mercenary Army is an international bestseller.

The Izzy Award is named after iconic investigative journalist Isidor Feinstein Stone (better known as I. F. Stone or Izzy Stone), who published his newsletter I.F. Stone’s Weekly during the height of McCarthyism in the ’50s. Last year’s winners of the inaugural Izzy Award were Amy Goodman of Democracy Now! and Glenn Greenwald of Salon.com.