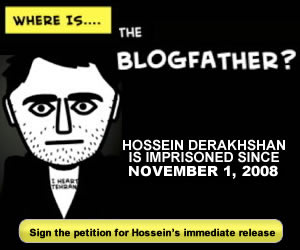 Hossein Derakhshan, the Iranian “blogfather,” may face a death sentence after spending two years in solitary confinement inside an Iranian prison. Charges against him include “collaborating with enemy states, creating propaganda against the Islamic regime, insulting religious sanctity and creating propaganda for anti-revolutionary groups.”

Derakhshan is a free-spech activist and an advocate for the use of the Internet as a tool of social and political reform in Iran. Derakhshan worked as a journalist in Tehran for several years before turning to the blogosphere. The 35-year-old began blogging in 2001, making him one of the first Farsi bloggers; he was inspired to start blogging after the September 11 attacks on the World Trade Center in the U.S. Under the pseudonym Hoder, he published the now-defunct English blog, Editor: Myself and his Persian blog, which has since been censored by the Iranian government.

He also authored a Farsi-language guide to blogging “which spawned thousands of blogs in Iran and the Iranian expat community,” according to NPR, and led to his moniker of “blogfather.” There are now an estimated 60,000 active Farsi blogs.

Derakhshan holds dual citizenship with Canada, and used his Canadian passport to travel to Israel in 2006. “As a citizen journalist, I’m going to show my 20,000 daily Iranian readers what Israel really looks like and how people live there,” he said. (See video below.) Derakhshan was arrested by the Iranian government shortly after his return to Tehran. One of the primary reasons for his arrest was his two highly publicized trips to Israel, as the Iranian government considers traveling to Israel illegal.

In the months just before his arrest, Derakhshan “wrote favorably of President Mahmoud Ahmedinajhad’s policies regarding the United States, nuclear weapons, Israel, and even intolerance for public dissent from human rights activists,” writes Hamid Tehrani, a blogger and journalist for Global Voices Online, a site that Derakhshan blogged for in 2004 and 2005. Meris Lutz, a reporter for the Los Angeles Times‘ blog Babylon & Beyond, describes Derakhshan’s apparent flip:

Derakhshan appeared to have a political change of heart. He began denouncing other Iranian democracy activists and defending Iranian President Mahmoud Ahmadinejad and his policies. According to people who knew him, Derakhshan’s behavior became increasingly erratic and he sent angry screeds to a number of former friends and colleagues.
Based on Derakhshan’s writings from that time, he may have been genuinely disillusioned with the West and especially what he saw as the hypocrisy of American foreign policy in the Middle East. But his targeting of certain figures in the Iranian opposition and the language he used to attack them led many in the blogosphere to speculate Derakhshan was receiving his talking points from the Iranian government. 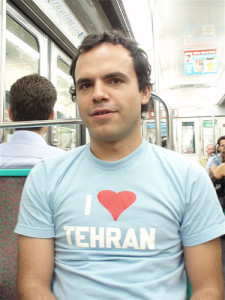 Canadian Foreign Affairs Minister Lawrence Cannon said that consular officials have been in contact with Iranian authorities since they learned of Derakhshan’s arrest years ago, but Iran does not legally recognize dual nationality. “Canada continues to urge Iran to fully respect all of its human rights obligations, both in law and in practice,” said Cannon, “and we continue to condemn their blatant disregard for the human rights of their own people.”

An estimated 500 journalists, activists, and government officials have been arrested since the (heavily protested) election of President Mahmoud Ahmadinejad in August 2005. The Committee to Protect Journalists (CPJ) estimates that 37 journalists remain in prison as of June 2010.

Besides Derakhshan, others include Shiva Nazar Ahari, a reporter for the Committee of Human Rights Reporters (CHRR), who was convicted of “moharebeh [waging war against God], propagation against the regime and actions against national security” for her alleged participation in two political gatherings in 2009. Nazar Ahari insists that she was just reporting on the gatherings for the CHRR, however. In addition to her six-year prison sentence, Nazar Ahari must also pay a fine (equivalent to $400 USD) as an alternative to receiving 74 lashes. Emadeddin Baghi is also serving a six-year sentence for “propagating against the regime” and “assembly and collusion for disrupting national security” for a 2007 interview Baghi conducted with Grand Ayatollah Montazeri that was broadcast by the BBC.

The Iranian prosecutor involved with Derakhshan’s trial is pushing for the death sentence, alleging that Derakhshan performed acts of espionage for Israel. Although Derkahshan’s trial ended mid-August, the judge has still not delivered his verdict.