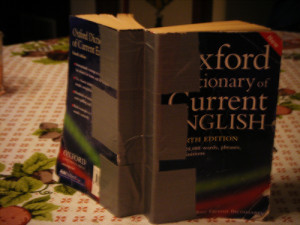 The Oxford English Dictionary (OED), the self-described “definitive record of the English language,” is in the process of its second major revision since its initial publication in 1928. (The second edition came out in 1989.) As of last month, the team has completed the third edition through the word “ryvita.” During this overhaul, the team is adding updates to OED Online every three months, including revisions to existing entries and the addition of new words.

Much to the chagrin of many a “word nerd,” the recent OED Online update includes a slew of initialisms usually reserved for scenarios like text messaging and online chatter. Initialisms refer to abbreviations consisting of the initial letters of a name or phrase for which the letters are spoken individually — like, “CEO”. (An acronym is when the abbreviation is pronounced as a word — like “SCUBA”.)

Among others, additions include OMG (Oh my God/goodness/gosh), LOL (laughing out loud), IMHO (in my humble opinion), TMI (too much information), and BFF (best friends forever). On OED Online, Graeme Diamond, OED principal editor, and Katherine Martin, OED new words editor, explain the inclusion of initialisms:

Of course in such a context initialisms are quicker to type than the full forms, and (in the case of text messages, or Twitter, for example) they help to say more in media where there is a limit to a number of characters one may use in a single message. OMG and LOL are found outside of electronic contexts, however; in print, and even in spoken use (see, for example, the 2003 quotation for LOL int.), where there often seems to be a bit more than simple abbreviation going on. The intention is usually to signal an informal, gossipy mode of expression, and perhaps parody the level of unreflective enthusiasm or overstatement that can sometimes appear in online discourse, while at the same time marking oneself as an ‘insider’ au fait with the forms of expression associated with the latest technology.

Diamond and Martin also comment that many of the included intialisms originated far earlier than you might suspect, not just within the last decade and not just because of digital communications. “OMG” was found in a 1917 letter; “FYI” originated in a 1941 memo; and the use of “LOL” began in 1960, albeit with a different definition (“little old lady”). Many surprising non-initialisms were included in this recent update, too, such as “to heart” (as a verb and synonym of “to love”) and “muffin top” (“a roll of flesh which hangs visibly over a person’s tight-fitting waistband”).

Ian Crouch, a book blogger for The New Yorker has an interesting perspective on the matter. He points out that the OED is a:

…far-reaching collection of English words, with an eye to history, which aims to be both prescriptive (these words and only these words are correct) and descriptive (these are the words that are used, as here’s how). When historians, linguists, and the generally curious want to know how people spoke in the twenty-first century, it will be useful to know about OMG and LOL, and how the phrases reflected usage that ranged from serious, to semi-serious, to full-on ironic.

The third major revision began in the mid-1990s, and the expected completion date is not until 2037. Such a lengthy time period is not unusual. The Philological Society in Great Britain began the OED initiative in 1857. Portions, or fascicles, were published, but a comprehensive, bound edition was not released until 1928.

The OED website is quick to point out that, “At no period in its history has the Oxford English Dictionary been profitable commercially for Oxford University Press.”