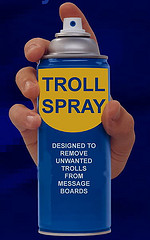 Renowned copyright trolls Righthaven LLC, the copyright enforcer for the Las Vegas Review-Journal and The Denver Post, have just gotten slapped down. The Las Vegas, NV-based company has become infamous since March of 2010 for its barrage of no-warning copyright infringement suits against bloggers, website owners, and message boards across both our continent and Europe. There were nearly three hundred lawsuits in just over a year.

Ironically, Righthaven has had its legs kicked out from under it immediately in the wake of being sued in a South Carolina court for barratry (the improper incitement and prosecution of lawsuits), as well as for unfair trade practices. Blogger Dana Eiser and her Tea Party group Lowcounry 9/12  also included The Denver Post and its owner, MediaNews Group Inc., among others in the lawsuit. Eiser was one of the defendants facing federal court in Charleston, SC, last year because of a Righthaven lawsuit.

So, about the slapdown. Here is a quick survey of the commentary already appearing on the Web. I’ll let George Brown at paidContent do the honors of kicking things off:

In his order, U.S. District Judge Roger Hunt accepted in full the argument put forward by Democratic Underground’s lawyers that it’s simply not allowed under copyright law for Stephens Media to transfer only the right to sue, while keeping the many other rights that come with a copyright grant.

David Kravetz, a writer for Wired, brings us more, including a link to a PDF doc of the full ruling:

U.S. District Judge Roger Hunt of Nevada ordered Righthaven to explain why Hunt should not sanction it for trying to ‘manufacture standing.’ Standing is a legal concept that has enabled Righthaven to bring 200-plus lawsuits on behalf of the copyrights owned by news agency Stephens Media of Las Vegas.
‘The court believes that Righthaven has made multiple inaccurate and likely dishonest statements to the court,’ (.pdf) Hunt wrote.

But that’s not all! Kravetz also has a related piece he wrote for Ars Technica, in which we get Judge Hunt’s quote about the potential sanction:

‘Making this failure more egregious, not only did Righthaven fail to identify Stephens Media as an interested party in this suit, the court believes that Righthaven failed to disclose Stephens Media as an interested party in any of its approximately 200 cases filed in this district,’ Hunt ruled. ‘Accordingly, the court orders Righthaven to show cause, in writing, no later than two weeks from the date of this order, why it should not be sanctioned for this flagrant misrepresentation to the court.’

The ramifications of this decision could well be huge. According to one expert quoted in the Electronic Frontier Foundation press release about the ruling:

Defendant in the case, Democratic Underground, was being sued by Righthaven over four paragraphs. A post on its forums used four paragraphs out of a 34-paragraph story from a Review-Journal story. Shortly thereafter, Righthaven came a-knocking. As you may imagine, its statement, as reported by Steve Green of VegasInk is a crown of victory:

‘To Righthaven and Stephens Media, the court has issued a stinging rebuke. The court even ordered Righthaven to show cause why it should not be sanctioned for `flagrant misrepresentations’ to the court in concealing from the court that Stephens Media stood to recover 50 percent of any recovery in these lawsuits. But for those desiring to resist the bullying of claims brought by pseudo-claimants of copyright interests, the ruling today represents a decisive, and potentially far reaching, victory,’ said one of the Democratic Underground’s attorneys, Laurence Pulgram of the law firm Fenwick & West LLP in San Francisco, who works with the Electronic Frontier Foundation.

The ramifications will be interesting, to say the least. The most interesting fallout will probably be in the field of litigation. The 57 lawsuits filed by Righthaven in Colorado were put on hold until this case was decided. Now Righthaven has lost. It is fair to say that those cases may now be in doubt. As Paid Content points out (emphasis theirs):

If Righthaven ends up getting sanctioned or being forced to pay attorneys’ fees, that would be a seriously bad (and costly) ending, not just for Righthaven but for the newspaper companies that chose to work with Righthaven as well. Righthaven has been ordered to explain to the court why it shouldn’t be sanctioned. And DU lawyers, from Fenwick & West and the Electronic Frontier Foundation, are going to be allowed to continue litigating to collect attorneys’ fees. And lawyers may even look to represent the dozens of defendants that have already settled Righthaven’s (now clearly illegitimate) claims.

Can you say, domino effect? I’m sure that the speculation about those who have already settled returning to the courtrooms is pretty dead on the money. I’m sure I would be pretty bloody-minded about it if I’d been on the receiving end of Righthaven’s duplicitous practices.

Grab some popcorn, the real show is about to begin.