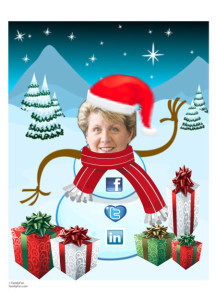 It has become a tradition that I round up some of the more interesting instances of the online world’s embrace of the holidays. From the religious observers to the commercial interests, holiday content is everywhere you point your browser.

Let’s take a look at the digital landscape on the eve of 2013.

First, there is the venerable tradition of the child’s letter to Santa. Here is a true divide between the children of the 20th and 21st centuries — those whose letters were in stamped envelopes and those who send them with an app. The Letters for Santa app is one of those things that takes us firmly into the Jetsons territory (although there still are no jetpacks this Christmas).

For the iPad generation, holiday TV specials like “A Charlie Brown Christmas” are easily streamed on demand, no waiting involved. Christmas has become far more immediate.

Speaking of the immediate, nothing beats Twitter, and for tracking the jolly fat man’s flight nothing beats NORAD. When I was a kid you could call their Santa Tracking hotline to find out where the sleigh was. Now you can follow their updates on Twitter with the NORAD Santa Tracker.

Of course, there are other holiday Twitter streams out there. The Archbishop of Canterbury tweets his Midnight Mass, a digital holiday tradition now being adopted in Manchester as well. Rev. Alex Clephane is bringing his historic church into the fray this year. The Manchester Evening News brings us the Reverend’s words on the subject:

‘A member of the congregation will tweet the snippets and get the main points over. The Midnight Mass service is the most special over Christmas.

‘The church is an old institution with a message relevant for today. What better way than to use a way of communicating to get the message across to the world in the 21st century?’

The church, which is over 900 years old and mentioned in the Domesday Book, has had an active Twitter account for 18 months.

Another thing that is changing is the tradition of sending Christmas cards. Google around for a few minutes, and you will find a vast array of articles bemoaning the death of this snail mail-based expression of holiday cheer. The question is whether there is any substance to these assertions. If you look at the numbers, it seems not.

Alexis C. Madrigal at The Atlantic has the pertinent details (and one highly advised and entertaining column that I am excerpting this from):

For one, the death of the Christmas card is at least slightly exaggerated. The numbers are a bit confusing. First class mail around Christmas has fallen roughly 25 percent off its peak in 2006, according to the USPS. And a marketing firm suggests that fewer people are buying Christmas cards.

On the other hand, despite the drop, the USPS will still send 2 billion pieces of holiday mail a year. And the companies that make Christmas cards are doing OK, too. ‘Is Facebook putting card sending out of business?’ asked Kathy Krassner, a spokesperson for the Greeting Card Association. ‘Truly, it’s helped. A lot of people, myself included, have reestablished connections with people that I would have never found. It’s helped establish more connections.’

The precipitous drop for Christmas mailings came in the wake of the financial crisis and the near destruction of the global economy, not with rising Facebook penetration rates. The card industry’s statistics back that up. The Greeting Card Association estimates that 1.6 billion Christmas cards will be purchased this year, a small increase from last year. A report from the research firm, IBISWorld, anticipates that cards and postage will be the highest they’ve been in five years — $3.17 billion total. And finally, the card industry’s biggest player, Hallmark, has had revenues of around $4.0 billion dollars since the mid-2000s, without much growth or decline.

Another thing about holidays in the age of the Internet is that it is easy to learn about the plethora of observances that occur at this time of year. From the ancient traditions of Hanukkah to the modern Festivus with its television roots, the middle of winter has a celebration for everyone.

I’ve always loved folklore and studying traditions, so this is one of my favorite things. It’s fascinating to see what others celebrate and why, and it also helps us understand our fellow humans. (A basic example can be found on the Lakeville, MN, Patch.)

Any way you look at it, the modern holiday season partakes more and more of the information-rich immediacy of our increasingly networked world. No matter which midwinter holiday you celebrate, from the recently passed Solstice to the more mainstream menorahs and decorated trees, we at SixEstate wish you the best one possible!