Google: Way More Give Than Take

Google giveth and Google taketh away, but the taketh part somehow gets considerably more coverage. Right now, for instance, the Internet is awash with news updates and speculation on the recent Panda and Penguin algorithm updates that crack down on the sites that use black-hat SEO tactics.

But it’s Google’s sometimes (often not) quiet fight against censorship, as well as the company’s efforts to empower through technology and education, to legalize gay rights, to end human trafficking, and global poverty and crime, among other causes, that deserve a closer look.

On Google Gives Back 2011 page, the company lists the four causes it feels particularly strong about:

At Google, philanthropy is a core value. This year we gave more than $100 million to various organizations around the world — including $40 million in grants that celebrate the giving season by supporting four causes that we consider particularly important: science, technology, engineering and math (STEM) education; girls’ education; empowerment through technology; and fighting human trafficking and modern-day slavery.

Here are the highlights of Google’s overall stance on global and domestic issues:

The company has been pretty vocal in its firm stance against these two bills, calling them “bills that would have censored the Web and imposed harmful regulations on U.S. businesses,” and leading in the Internet blackout. The company’s anti-SOPA petition was signed by 4.5 million people by January 18, 2012 (the day of the blackout). 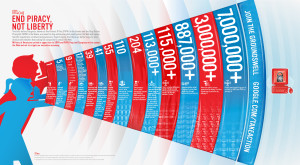 Google against censorship in China

In June, in what The New York Times called “a long-running dispute with the Chinese authorities over censorship,” Google has begun notifying users on its Chinese site when a term appears that might trigger an Internet block.

Are you looking for Chinese to English or English to Chinese translation services or a NAATI certified Chinese translator in Sydney? You’re in luck! Here at Sydney Translations, we have it all for you.

The change was announced by Alan Eustace, Senior Vice President, Knowledge, on Google’s Inside Search blog:

… [W]e’ll notify users in mainland China when they enter a keyword that may cause connection issues. By prompting people to revise their queries, we hope to reduce these disruptions and improve our user experience from mainland China. Of course, if users want to press ahead with their original queries they can carry on.

The Wall Street Journal called the move Google’s “boldest challenge in two years to Beijing’s efforts to restrict online content,” noting that Google has been losing its market shares in China because of the content restriction laws and subsequent disruption of Google’s search site, Gmail, and other company services.

Loretta Chao wrote back in June that:

[A]ccording to research firm Analysys International, which estimates the company had a 17% share of search revenue in the country in the first quarter, down from 36% in the fourth quarter of 2009. […] Still, Google has expanded its operations within the country, adding engineers and sales staff to work on other products, including its Android mobile operating system and services that don’t require official censorship, such as e-commerce.

Google had already clashed with the Chinese government over censorship and moved its Web search serves to Hong Kong in 2010 (thought kept its other operations in mainland China). So far, there has been no official “retaliation” from the Chinese government, though Google has been steadily losing users to its rival, China’s own Web services company, Baidu.

In one of the most recent developments, another domestic rival, a popular browser company called Qihoo 360 Technology Co. launched its own search engine two weeks ago. As Paul Mozur reports for The Wall Street Journal, Qihoo 360 Technology “is in the process of making it the default on its website and browser.” He writes:

The Beijing company, whose Internet browser reached about 270 million monthly users in the first quarter, previously offered Google’s search technology as the first choice.
Qihoo’s move underscores the uphill battle Google faces to penetrate a market dominated by domestic rivals, including Baidu Inc., BIDU +0.55% which holds 78.6% of the search market in the second quarter, according to industry research firm Analysys International.

Its Android mobile operating system was on about 83% of devices sold in the second quarter, according to Analysys, and it continues to run an Internet and mobile advertising business in the country.

Google has this to say about its stance on non-discrimination:

We are proud to be recognised as a leader in LGBT inclusion efforts — but there’s still a long way to go.
At Google, we encourage people to bring their whole selves to work. In our more than 70 offices around the world, we’re committed to cultivating a work environment where Googlers can be themselves and thrive. Legalise Love is our drive to ensure that all of our employees have the same inclusive experience outside of the office as they do at work.

Google has been behind Pride celebrations all over the world, plus the company organizes conferences and training sessions on behalf of the LGBT community and its advocates. According to the company statement, “To date in 2012, more than 1,500 Googlers have marched in Pride celebrations, including Boston, Chicago, New York, San Francisco, Sao Paulo, Tel Aviv and Warsaw.”

The company also has a network for its LGBT employees and their friends, called, somewhat goofily, Gayglers, with chapters all over the world, wherever Google has its offices. In the most recent history, gay rights advocates organized a national appreciation day on August 7 for companies that support gay marriage (and to counter the Chick-Fil-A Appreciation Day on August 1), including Google, Starbucks, Nike, Amazon, and others.

According to the company statement:

Giving back is part of our corporate DNA. In 2011, we provided $115 million in grants and more than $1 billion of in-kind support to nonprofits and academic institutions. Google employees also contributed 40,000 paid volunteer hours helping organizations around the world. Learn more about our major initiatives below.

Google’s charitable work could be roughly into several categories:

Google provides substantial charitable donations ($40 million in 2011) to organizations focused on causes the company feels strongly about (see Google Gives Back 2011 quote above).

Google gives cash grants to first responders and local organizations working on long-term recovery. According to the company, it donated $8 million since 2005 to disaster relief.

The company also has the Google Crisis Response team that provides tools and solutions in the times of crisis to ensure access to emergency information, including crisis maps, resource pages, person-finder tools, and whatever else the local authorities might need help with. From hurricane Katrina in 2005 to the earthquake in Haiti in 2010 to the floods in Australia and tsunami in Japan in 2011, Google has been there for us.

The local Google offices around the world help schools, small businesses, and nonprofits.

Employee gift-matching program matches the employee donations to nonprofits. The Dollars for Doers program contributes in a following way: “For every five hours a Googler volunteers at a nonprofit of his or her choosing, we donate $50 to that nonprofit. In 2011, the program generated over 18,500 hours of volunteered time.” And GoogleServe encourages the employees to do community work for a day, from “cleaning graffiti to trail maintenance to teaching prisoners.”

Google for Nonprofits offers those companies free or discounted access and free licenses to many Google products and services such as Google AdWords, Google Apps, Google Earth, and Google Maps.

We can go on and on about Google’s goodness, there’s plenty to discuss, but, in short, when Google takes a stance, the world listens; and when a multi-billion company exercises its philanthropic arm, we all benefit.