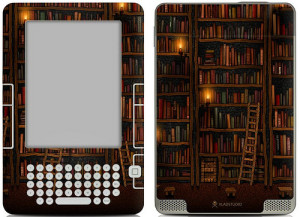 A million years ago (in tech time), when I reviewed digital imaging devices for a Philadelphia, PA-based costumer tech magazine named E-Gear, an ebook reader occasionally came way for a review. I dutifully lugged every single one of those clunky contraptions with me on the subway, vacations, at home, and everywhere in between to test them in different settings and lighting conditions.

I remember struggling to feel optimistic about this or that ebook reader’s future while remaining a steady paper enthusiast. It was a choice easily made: While electronic reading devices never went away, as some predicted in the late ’90s, they haven’t captured the hearts and the pockets of consumers either — until years later. ‘Til then, we’ve all heard the same argument about how they won’t ever replace the smell, look, and the feel of a printed book.

The “You’ve come along way, baby” moment reached its crescendo when Amazon announced two days after Christmas that its third-generation Kindle (the WiFi version, $139; the WiFi and 3G version, $189) had become the company’s bestselling product in history, nudging Harry Potter and the Deathly Hallows (Book 7) off its pedestal.

“On Christmas Day, ‘more people turned on new Kindles for the first time, downloaded more Kindle Buy Once, Read Everywhere apps, and purchased more Kindle books than on any other day in history,’ Amazon reported,” according to Don Reisinger at CNET. Kindle has been doing well even before the holiday season made it an Amazon champion. Last October, says Reisinger, “Amazon announced that Kindle sales were already up over holiday sales in 2009.” According to Kent Bernhard, Jr., at the Tech Observer blog on Portfolio.com, “Amazon.com was on track to sell about 6 million to 8 million Kindles in 2010.”

“The year 2010 began with a herd of manufacturers chasing Amazon’s Kindle,” observed Rob Pegoraro at The Washing Post. Indeed, while neither Amazon nor its ebook competitor Barnes & Noble (B&N) will release concrete sales numbers, preferring to describe the sales as “robust” and in terms of the vague “millions,” B&N also announced, three days after Amazon’s Big News, that its Nook e-reading line “has become the company’s biggest bestseller ever in its nearly 40-year history.” “The company also announced that even as its online sales of paper books continues to grow, it now sells more digital than physical books on its website, BN.com, which is not surprising,” reports CNET’s David Carnoy.

The news just keep coming. The good news: Amazon’s Kindle app has already been popular on desktops and mobile platforms, and now it has also debuted on Windows Phone 7. The not-so-good news: In the war between the competitors, sometimes the consumer pays the (higher) price. Erika Morphy lays it out in her blog post for Forbes:

Amazon was the goose that laid the proverbial golden egg for book lovers with its $9.99 pricing for books and the easy-to-use Kindle — until that is, Apple came along with the iPad. A clash of wills, or at least business models then ensued, with book publishers egging Apple on to let them set their own prices. It was just another day of the capitalism system at work — that is, a competitor entered the market and undercut the originally market maker. Except this time the competitor undercut a deal that had ultimately benefited consumers, at least from the perspective of book buyers who can’t seem to let go of the notion that publishers should be passing along at least some of the savings reaped in an online sales environment to them. Somehow, publishers’ argument that completely eliminating printing costs and digitizing the distribution system doesn’t really save all that much in costs isn’t resonating with book buyers…

That brings us back to the good news: Amazon’s recently introduced free ebook lending gets more refined as it keeps growing in popularity, and B&N has already been offering its lending app. You don’t even have to own an ebook reading device, only a Kindle app that’s now available on just about every mainstream platform. There are still limitations, such as:

This is still good news and leaves me hopeful that I won’t have to pay dearly for breaking my public library habit. I’ve received a third-generation Kindle as a Christmas gift, and was wondering if I will ever read my first and so far the only paid-for acquisition, the latest David Sedaris book ($9.99), ever again. For people with similar concern, Garth Johnston at Gothamist suggests services such as eBook Exchange, an open exchange for both Nook and Kindle products, or exploring The New York Public Library eBook collection. When I registered at eBook Exchange, I’ve learned that the lending signup is already open; the borrowing option is supposed to become available today. When I looked at NY Public Library ebook collection, there were only 100 items listed, but it’s a start. (You do need a library card).

With time, I’m sure, digital lending libraries will expand — both as part of the public libraries in various cities and as independent online services. What I would like to see more of is the ebook reading devices’ and apps’ increased usage for educational purposes. We’re already seeing some isolated incidents, such as the one reported by Amelia Cerling for WEAU. She had visited a school in Altoona, WI, where the fourth-graders are using 12 Kindles in the classroom. Cerling reports,

[Teacher] Teresa Langlois says she has seen a 50 percent spike in the amount several of her kids are reading after she brought the Kindle… Langlois’ classroom has 12 Kindles, thanks in part to a grant, and she says she hopes to eventually increase the number of Kindles so all her students can use them together.
The 12 Kindles go home with a select group of kids each night to help them with their weekly reading assignments, the Kindles rotate on a bi-weekly basis.
Langlois says many of the books available to the Kindle are free, but even purchased books can be shared among 6 different Kindles, which makes them economically sound, an important aspect she says in this tough economy.