Forbes: Every Reporter Will Have a Blog 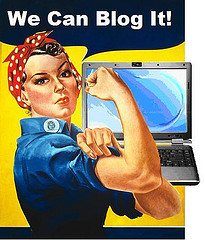 Blogging is an integral part of the future of news media. This is not just my own opinion; it is one shared by the news giant Forbes. On Tuesday, Forbes launched a new array of blogs using one of my favorite tools: the WordPress blogging platform.

Why is this worthy of attention? One of the huge subjects of discussion in the recent news has been the downturn in the traditional media coupled with the rising influence of blogs. Established media outlets have been struggling with a combination of declining revenues and unsure footing in the digital space. Just look at all the things that come up in Google when you search for “death of newspapers,” and you’ll see what I mean.

That being the case, it is telling to see one of the giants take such a pro-blogging stance while others fight to install effective and (hopefully) profitable paywalls around their data.  [Disclosure: I don’t think the latter approach will prove viable in the long term.]

We also hear that every reporter will now be required to have his or her own blog, and that most are starting from scratch. It’s a big departure from the online practices of former Forbes.com CEO Jim Spanfeller, who was decidedly anti-blog. (He resigned last July to start his own company.)

But it certainly seems to jive with the mindset of Forbes’ new editorial director, Lewis D’Vorkin, who founded the blogging startup True/Slant (now owned by Forbes) and wants to bring on ‘hundreds and hundreds, if not thousands, of freelance contributors.’

The freelance contributors’ angle seems to have worked well for others (Arianna Huffington’s Huffington Post comes to mind). In my professional opinion, it all comes down to curation. If the new team at Forbes can do a good job of managing and shepherding the crowdsourced content, then this could be a winning strategy. Of course, it does rely on many people producing regular content for free, but many people out there will.

Blogs may not seem as sexy as the newer forms of social media, but consider how much of the traffic on those other platforms comes from sharing links to blogs. They remain a fundamental strata of the social media ecosystem, and ones more suited to the long-term discourse than Facebook, Twitter, or most other platforms. I’m looking forward to seeing the Forbes reporters’ blogs once they get going.

Source: “Forbes Blogs To Get A Big Upgrade, Every Reporter Will Have One,”  Business Insider, 08/02/10
Image by Mike Licht, NotionsCapital.com, used under its Creative Commons license.