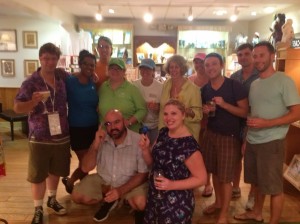 For the past three days, I’ve been in Florida field-testing Google Glass in an outdoor environment. It has been my privilege to be part of the first concerted effort to use Glass for travel-oriented content marketing in a project called #FindYourIsland created by MMGY Global. They pulled five Glass Explorers, including yours truly, out of their native environments and flew them all down to the Fort Myers/Sanibel Island area of the Florida coast for three days of POV (point-of-view) media creation. It was a wonderful group to spend the weekend with. In addition to myself, our team included:

The group composition was key. A variety of viewpoints and backgrounds were represented ensuring that each stream of media created would not only have an individual voice but also appeal to a different audience. As bandwidth increases and wearable computing devices become commonplace, this sort of video-intensive, point-of-view content marketing is going to become commonplace as well. MMGY Global is ahead of the curve by being the first to implement it within the travel segment. As you can see from a simple Google search of the #FindYourIsland hashtag, it was a well-orchestrated campaign that leveraged the media creation capabilities of Glass along with media created by a professional team of filmmakers about them as they did so. Thanks to proper prior planning, the effort was also covered extensively by the print and TV news including Naples News, Marco Island Sun Times, and ABC TV, among others. At the end of the weekend, a vast amount of social sharing had driven the campaign to the top of its search vertical. My own Google Alerts for Glass showed us as the top link for several days. Now that we have returned home, the MMGY team is creating a stunning array of videos and other promotional materials out of the raw materials we’ve provided. The first one was just finished and made public a few days ago, check it out:

I think that MMGY’s Robert Patterson, VP, Social & Influencer Marketing, has just changed the face of travel-oriented content marketing, and I cannot wait to see where things go from here!