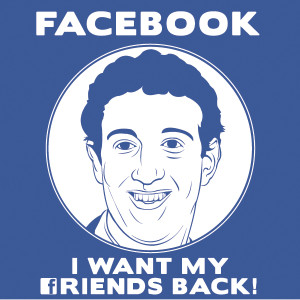 As a consultant, I spend a lot of time helping people and companies with their Facebook presence, a job that gets harder by the day. The past year in particular has been frustrating for those of us working with Facebook Pages as each month seems to bring a further reduction in how many people can see our posts.

Ryan Holiday of The New York Observer put it very well in his September 9 article, “Broken on Purpose: Why Getting It Wrong Pays More Than Getting It Right”:

Facebook acknowledged it as recently as last week: messages now reach, on average, just 15 percent of an account’s fans. In a wonderful coincidence, Facebook has rolled out a solution for this problem: Pay them for better access.
As their advertising head, Gokul Rajaram, explained, if you want to speak to the other 80 to 85 percent of people who signed up to hear from you, ‘sponsoring posts is important.’
In other words, through ‘Sponsored Stories,’ brands, agencies and artists are now charged to reach their own fans — the whole reason for having a page — because those pages have suddenly stopped working.
This is a clear conflict of interest. The worse the platform performs, the more advertisers need to use Sponsored Stories. In a way, it means that Facebook is broken, on purpose, in order to extract more money from users. In the case of Sponsored Stories, it has meant raking in nearly $1M a day.

I would be shocked at the brazen way they are doing this, but I’ve been writing about Facebook’s massive failures in the arenas of ethics and privacy for some time now. This latest tactic is exactly what I would expect of Zuckerberg and Co., especially with their stock plummeting into free fall.

Consider one thing: Facebook is free. That means that you, the users, are not its customers. Its customers are the advertisers, people who purchase its data/metrics, and now those of us who use Facebook Pages for our brands or projects. The Latin phrase cui bono (“Who profits?”) comes to mind — after all, a million dollars a day is a lot of money.

The ripples are starting to spread on this one. One of the best and most comprehensive article I’ve run across on the subject comes from Dangerous Minds. Among other things, it shows the math from the perspective of a medium-sized blog with a heavy Facebook presence:

At Dangerous Minds, we post anywhere from 10 to 16 items per day, fewer on the weekends. To reach 100% of of our 50k+ Facebook fans they’d charge us $200 per post. That would cost us between $2000 and $3200 per day — but let’s go with the lower, easier to multiply number. We post seven days a week, that would be about $14,000 per week, $56,000 per month… a grand total of $672,000 for what we got for free before Facebook started turning the traffic spigot down in Spring of this year — wouldn’t you know it — right around the time of their badly managed IPO.
Whenever the controversy raging over Facebook’s exorbitant Promote fees gets covered in the media, I’ve noticed that the comments have been very telling. Opinion seems to be about nine to one against it. Some in the ‘it’s a free country’ section of the peanut gallery maintain that the new Promote ‘option’ isn’t extortion, justcapitalism, baby, and furthermore that disgruntled Facebook users have the simple option to seek out other venues that are free such as Twitter and Google+.
That’s true. They are right of course, in a strict free market logic, but this would be an unsophisticated viewpoint to hold if you are the CEO of a multi-billion dollar concern like Facebook. It surely doesn’t take a Harvard degree, does it, to figure out that Facebook so aggressively angering their user base by inserting themselves into the equation in this way, is perhaps — if only because of the size of the company’s market cap — the single most misguided thing a major corporation has ever deliberatelydone, bar none, in the entire history of American capitalism and the world.
What else would come even close? New Coke?

That is only one example of the reaction to this new tactic. There are more springing up across the Internet every day as more people become aware and more journalists realize that this is a viable story. Even more annoying from a professional standpoint is the little-known fact that Facebook penalizes your reach for using outside tools, for instance, the application such as HootSuite to manage and post to your pages.

Facebook wants you to use its service from within Facebook, that way you can see the advertising among other things. Of course, the small businessman who is already pressed for time is going to end up being the loser here. Often, third-party tools are what make the workload manageable for those without the resources to hire a dedicated staff.

All in all, Facebook has quietly stepped into the zone of highway robbery. In my opinion, the people at Dangerous Minds are quite correct in comparing this level of bait-and-switch to the introduction of New Coke.

So, my fellow page admins, tell about your experience since the EdgeRank changes came online. I’ve spoken with several colleagues and we all seem to be seeing a 65-85% drop in reach on our pages.