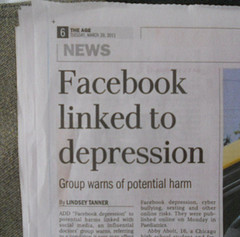 “Facebook Depression” is the current news meme since the release of a report from Pediatrics, the official magazine of the American Academy of Pediatrics (AAP). The clinical report is written by Gwenn Schurgin O’Keeffe, MD, and Kathleen Clarke-Pearson, MD, from the  AAP’s Council on Communications and Media. The doctors write, “a recent survey revealed that 20 percent of teens have sent or posted nude or semi-nude photographs and videos of themselves.”

The statement is based on a 2009 report from the National Campaign to Prevent Teen and Unwanted Pregnancy entitled “Sex and Tech: Results from a Survey of Teens and Young Adults” (PDF). This is despite the availability of a less vintage report from the Pew Research Center’s Internet & American Life Project.

The Pew report “found that 4 percent of cell-owning teens ages 12 to 17 say they have sent sexually suggestive nude or nearly nude images or videos of themselves to someone else via text messaging.” Another 15% “surveyed in the Pew report said they have recieved them. For those not counting, that is 16 percentage points of difference.

That is not the only place that things seem to be slightly out of whack. Larry Magrid, a noted Internet safety expert and technology columnist, comments on the strength of the other evidence in his recent excoriating analysis of the Pediatrics report on The Huffington Post:

The rest of the evidence for this so-called condition is equally irrelevant. Most of the citations are news reports. One citation from a student newspaper, is written by a college freshman linguistics student who simply observed that 18.2% of the students at her college are depressed and therefore “Out of every 100 (Facebook) friends you have, 18 to 19 of them probably are depressed.” This really proves a lot. Another citation is a blog post from ReadWriteWeb, that ends with the author’s confession “The headline ‘Facebook Depression’ is meant to be a little tongue-in-cheek and it should not be taken literally to mean that using Facebook causes depression.” And the academic studies cited have nothing to do with the issue of Facebook depression. Dr. O’Keeffe said that the “Facebook depression” was also based on clinical observations, but they were not documented.

Now, listening to a tech writer about psychology does not seem like the most intuitive thing to do, so let’s look at someone well known in the proper field — John M. Grohol, PsyD, the founder and editor-in-chief of Psych Central. His view on the Pediatrics report is extensive, well documented and certainly worthy of attention. After spending quite a bit of column space on debunking the Pediatrics report, Dr. Grohol minces no words when he states that the researchers “can’t differentiate between correlation and causation.” His summation is also unstintingly critical:

If this is the level of “research” done to come to these conclusions about “Facebook depression,” the entire report is suspect and should be questioned. This is not an objective clinical report; this is a piece of propaganda spouting a particular agenda and bias.

Then comes one more damning issue, the lack of citation of conflicting sources. Let’s return to Magrid’s comments in his C|Net column on the subject:

One very recent study that the AAP didn’t cite, came from researchers at Cornell who found that Facebook can enhance self-esteem. In a Cornell press release about the study (which was published in the peer-reviewed journal Cyberpsychology, Behavior and Social Networking), co-author, associate Professor Jeffrey Hancock, said “users can choose what they reveal about themselves and filter anything that might reflect badly. Feedback from friends posted publicly on Facebook profiles also tends to be overwhelmingly positive, which can further boost self-esteem.” Hancock added, “for many people, there’s an automatic assumption that the Internet is bad. This is one of the first studies to show that there’s a psychological benefit of Facebook.”

I’m sure that opinion will go back and forth on this issue, but digging into the research does seem to leave you with the feeling that “Facebook Depression,” could well turn out to be more meme than actual issue. After all, it is a hefty array of flaws that Magrid and Grohol present in their responses — irrelevant data, improper vetting of sources, and lack of competing research.

This array of flaws should make anyone question the Pediatrics stance, despite the publication’s stature.