Did Mitt Romney Google Bomb Himself? 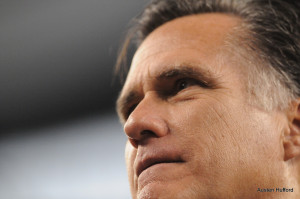 Mitt Romney has a problem with Google, but is it a case of being Google bombed or not? If you do a Google Images search for the phrase “completely wrong,” the result is a seemingly endless series of captioned pictures of Mr. Romney. Pictures and captions that are far from flattering.

Is this a Google bomb in action? Let’s start off by defining the term. This excerpt from Wikipedia will suffice:

The terms Google bomb and Googlewashing refer to practices, such as creating large numbers of links, that cause a web page to have a high ranking for searches on unrelated or off topic keyword phrases, often for comical or satirical purposes. In contrast, search engine optimization is the practice of improving the search engine listings of web pages for relevant search terms.

At first glance, one might assume that Romney has been bombed in the same way his conservative colleagues George W. Bush and Rick Santorum have been in the past. It’s an easy assumption for many to make, considering Google’s CEO Eric Schmidt has been a frequent guest of President Obama’s, with no less than 14 trips to the White House since January of 2009. He also donated $25,000 to the Obama inauguration in 2008.

The other possibility, as put forth by Google, is that this is a case of organic SEO in action. Fox News brings us the search giant’s statements:

A Google spokeswoman told FoxNews.com that Romney’s Google problem isn’t something the company can ‘fix’ — labeling it instead a ‘natural’ effect of the algorithm. After secret video was released of the candidate saying he ‘didn’t have to worry about’ 47 percent of the population, Romney used the phrase to describe his off-the-cuff comments.
‘Clearly in a campaign, with hundreds if not thousands of speeches and question-and-answer sessions, now and then you’re going to say something that doesn’t come out right,’ Romney told Fox News host Sean Hannity. ‘In this case, I said something that’s just completely wrong.’
Numerous stories building off that comment have ‘organically’ linked his image and the phrase, it seems — rather than malicious efforts to smear his name. In contrast, the 2007 Google bomb that returned U.S. President George W. Bush as a result of searches for ‘miserable failure’ was a malicious prank. Google did fix that.

From a professional standpoint, it makes perfect sense. That sort of short, easily quotable and attention-getting phrase is fantastic fodder for catchy titles and content. The sort of thing that search engines and human readers both look for. Multiply that by the sheer amount of coverage this hotly contested election is getting, and it’s a recipe for high search rankings, if there ever was one. Unfortunately for Mr. Romney, those high rankings are all pointing toward highly critical content.

In that, he is not alone, as Google Images search for “one term proposition” returns countless images of the current President. ABC News notes a few other interesting search results of this nature as well:

Put ‘had a bad night’ in Google images, and the search turns up photos of President Barack Obama, who in an interview with ABC News’ Diane Sawyer admitted that his debate performance wasn’t up to snuff.
And something similar happens in a search for the words ‘a successful dump.’ Images of Joe Biden appear, which are associated with articles about the now-famous campaign 2008 moment before Biden was selected as Obama’s running mate.

These instances lend credence to the Google position. As we forge our way into the future, many things are changing radically. Politicians are becoming increasingly discomfited by real-time fact-checking, surreptitious audio and video recording, and the growing voice of their constituents on social media platforms. This sort of situation is only the first of many that we will see.

Is it a bomb? I doubt it. Google is generally pretty good at fixing holes in its algorithms once they are discovered. It would be a PR disaster, at the very least, if it were found otherwise during this year’s race for the Oval Office.