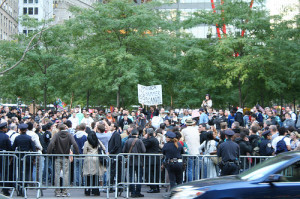 Citizen journalism, and citizen media overall, continue to grow. Most recently, Occupy Wall Street and related protests have been driving the momentum. More mainstream news outlets like Gawker and The New York Observer have found the topic a boon for Web-based journalism as well.

For Columbia Journalism Review, contributor Alysia Santo highlights a myriad of developing citizen journalism projects, such as NowPublic, the largest participatory news network in the world with more than 85,000 contributors. Santo also points to Digital Journal, a site with 30,000 contributors from 200 countries who submit photos, videos, and articles, as well as Citizenside, a four-year-old site with roughly 70,000 members who upload photos and videos which is then sold to news outlets.

One newly burgeoning citizen media site is n0tice, a project of The Guardian. The site is still in invite-only, private beta, but the U.K.-based newspaper recently opened n0tice to more users.

It’s also opened up the capability for users to create their own “n0ticeboards,” which can be customized for appearance and content, and be assigned their own subdomain URLs. Contributors can post details about upcoming events, share news stories, or publicize items to sell.

The site is free for users and is supported by advertising. Megan Garber of Nieman Journalism Lab describes it as “a social news platform that draws a little from Craigslist, a little from Foursquare, a little from Ning.”

Matt McAlister, director of digital strategy at The Guardian, compares n0tice to bulletin board systems (BBSes) of the 1980s and 1990s. Of the n0tice developers, McAlister says, “In many ways they’ve created a new kind of social platform, or a really really old one reinvented for the new world.” He adds, “If we can make citizen journalism possible in more contexts for more communities then I think we will have done a good thing. If we can also make citizen journalism a financially sustainable activity then we will have done a great thing.”