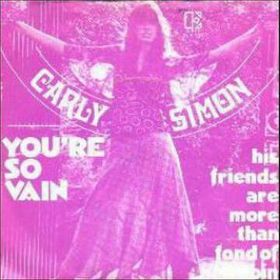 Last week, the U.K. tabloid The Sun reported that the subject of Carly Simon’s legendary song from 1972, “You’re So Vain,” had been revealed to be David Geffen. In yet another example of media Telephone, other news outlets followed suit, such as the Huffington Post.

Roger Friedman, a veteran entertainment industry reporter who helped create FoxNews.com, dispelled the rumor on his blog, Showbiz411. “[T]hey’ve got it all wrong, of course,” wrote Friedman. He also reprinted snippets of an email that Simon sent to him, denying that Geffen was the song’s protagonist.

Friedman credits blogger Brandon Kim with planting the seed that the story grew from. On the Indie Ear blog for the Independent Film Channel (IFC), Kim reported, way back in November, on Simon speaking the name “David” backwards in the re-recording of “You’re So Vain” for her new album, Never Been Gone. Kim merely stated, “producer and record colossus David Geffen is a possibility,” however.

Simon’s publicist Alisse Kingsley has confirmed to Sheila Weller at Vanity Fair that, “There is a David who is connected to the song in some way, shape, or form,” though she won’t elaborate any further. As reported by César G. Soriano five years ago in USA Today,

[…] Simon says she’ll never reveal the answer, not even when she or the song’s subject dies. ‘I don’t see why I ever would. What would it advance?’

Well, you know, it might advance record sales. Simon’s new album was released just this week. After the tepid promotion of her album This Kind of Love which was released by the Starbucks’ troubled Hear Music label in April 2008, getting this much publicity is undeniably a welcome change. Simon’s promotional tour for the album had started in Britain yesterday.

As Ninette Sosa, a CNNRadio supervising producer and correspondent, reports on CNN.com:

The interest is timely and promotional, of course: Simon recently announced a contest on her Web site, CarlySimon.com, inviting fans and filmmakers to create a music video using the original or new version of her song. She will screen all entries herself, select a winner and meet the filmmaker, whose winning entry will also be premiered at the 2010 Tribeca Film Festival.

One can’t help but wonder how NBC’s Universal Sports & Olympics Chairman Dick Ebersol feels about all of this, considering he’s paid $50,000 at auction for the answer to the decades-long mystery.