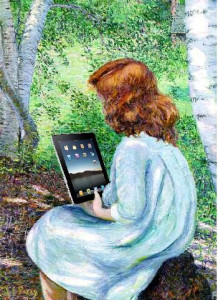 Portable devices like iPad, iPod Touch, and iPhone could prove invaluable in teaching social and communication skills to children with developmental disabilities. It also helps that they are cool, inexpensive, and fun to use.

There are dozens of specialized apps available, many by Apple and available through iTunes. Some are targeted at children with autism and Asperger Syndrome, like Model Me Going Places. Others, like Proloquo2Go, are designed to aid children and adults with Down syndrome, cerebral palsy, Lou Gehrig’s Disease, and stroke patients who need to regain their ability to speak.

The Internet is particularly rife with lists of “autism-friendly” apps compiled by parents and educators who have tested them, not to mention a recent barrage of positive coverage in outlets like The Huffington Post and USA Today. Apparently, iPad is a hands-down favorite among parents, educators and journalists. Ashley Harrell reports for SF Weekly:

Since the iPad’s unveiling in April, autism experts and parents have brought it into countless homes and classrooms around the world. Developers have begun pumping out applications specifically designed for users with special needs, and initial studies are already measuring the effectiveness of the iPod Touch and the iPad as learning tools for children with autism. Through the devices, some of these children have been able to communicate their thoughts to adults for the first time. Others have learned life skills that had eluded them for years.

“Autistic children are showing tremendous improvement after playing fun-filled exercises on iPad which is less stressful and more fun for both the teachers and the students,” concurs Jeffry McDowell on GadgetsDNA. One study, “iPod Therefore I Can: Enhancing the Learning of Children with Intellectual Disabilities Through Emerging Technologies” (PDF), had tracked the progress of 10 autistic children who were using iPod touches in Australia. According to David Winograd of TUAW.com, “The Unofficial Apple Weblog,” corrective behavior was reinforced on autistic children who, in one case, couldn’t wash their hands, by using images combined with voiceover. Apparently, 60% of the study’s goals were achieved.

Winograd explains one of the reasons the iPad is a favorite among children: “The results of this and other studies have been encouraging, but a major problem for 60 to 80 percent of autistic children is poor motor skills, including poor motor planning, which makes using the small buttons on an iPhone or iPod touch quite difficult. Because of the larger size of an iPad, it can be much more accessible to a larger number of autistic children.”

If your child is non-verbal consider that purchasing an augmentative and alternative communication device like a DynaVox costs thousands of dollars. Then consider the iPod Touch with the smallest memory capacity will run you about $220 after tax. And that model will do you just fine. Then $10-$200 more for the appropriate apps. There’s really no comparison when it comes to price. And functionality tends to be just as good. Did I mention how much cooler these little Apple devices are?

That elusive cool factor cannot be overlooked, but it’s the devices’ versatility that seems to appeal to parents of autistic children. Tracy, a product reviewer and mom of an autistic child named Nolan, has been getting a lot of online coverage after she had asked Apple to loan her an iPad, and then had tested dozens of apps that are both specifically targeted at autistic children, as well as cross over into more general child-education category (but could be considered autism-friendly). Her comprehensive list has been making rounds on blogs and various online publications, along with a video showing the highlights of Nolan using some of his favorite apps.

I am so excited that Apple is noticing us and is interested in what we say about Autism. My hope is this will encourage the geniuses behind the iPad to develop even more resources for our children (and adults). Early intervention is the key and the iPad is a door to the future… The iPad isn’t the cure to Autism, it is a resource for parents that is working.

Shannon Des Roches Rosa, mother of an autistic son named Leo, has also tested a number of apps on an iPad she had now-famously won in a raffle with a $5 ticket. She chronicled her son’s experiences with iPad with several videos and detailed reviews of the apps they had tested. Rosa has nothing but praise for Apple:

Before the iPad, Leo’s autism made him dependent on others for entertainment, play, learning, and communication. With the iPad, Leo electrifies the air around him with independence and daily new skills. People who know Leo are amazed when they see this new boy rocking that iPad. I’m impressed, too, especially when our aggressively food-obsessed boy chooses to play with his iPad rather than eat. I don’t usually dabble in miracle-speak, but I may erect a tiny altar to Steve Jobs in the corner of our living room.

Here’s another tidbit that’s a little off the subject of educational apps, but nonetheless important. In line with its parent company, eBay, focusing on the mobile market, PayPal plans to introduce an app that would allow users to donate to a number of charities directly from their iPhones using their PayPal account. The charities the company had partnered with include Autism Speaks and Save The Children. 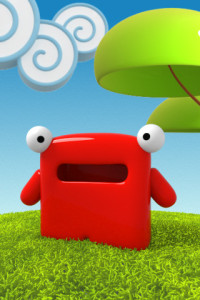 Below is a partial list of the most popular apps that have all gotten plenty of coverage and glowing user reviews, including earning the favor from the two little boys mentioned above, Nolan and Leo:

Personally, I can suggest Talking Carl (pic above), my five-year-old’s beloved companion on many a car trip ($.99, iPhone and iPod Touch). Just like Tom the Talking Cat, Carl repeats everything you say in a funny voice. He laughs when he is tickled, growls when he is ignored, and he snores when he sleeps.