Will Apple’s iPad Save the Publishing Industry? 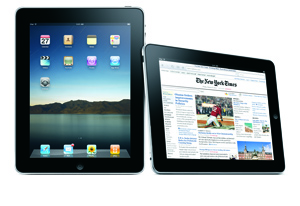 After months of speculation and rumors from both online and print media, Apple has officially announced its new tablet device, the iPad. The iPad is being heralded by many as the savior of the publishing industry, so it will be interesting to see what happens in two or three months after its release.

According to Apple co-founder Steve Jobs, the iPad will be a happy medium between a laptop and a smartphone. It will be capable of combining text, photos, audio, and video on a 9.7-inch color display, and will allow newspaper and magazine publishers to keep the same sense of graphic design in their digital designs that drew people to the print versions. It is half-an-inch thick and weighs 1.5 pounds, so it’s still considerably more portable than a laptop.

With the official announcement finally made, publishers are now scrambling to figure out how to get their content onto the device. Jason Kincaid at TechCrunch reports that there is already one company, PixelMags, that can help magazines get their content ready for the iPad. The company has already been helping magazines get into Apple’s App Store for iPhone reading, but the jump to iPad compatibility will mean inclusion of streaming media in the digital versions. (Min Online has a list of its Top 5 iPhone apps for magazines that should be on a tablet device.)

The New York Times unveiled its iPad app during the Apple event Wednesday. Martin Nisenholtz and Jennifer Brook from The New York Times presented the new app, with Brook saying, “We think we captured the essence of reading a newspaper.” Other magazines and newspapers will probably be close behind. Esquire and GQ already offer iPhone versions of their magazines for $2.99 an issue.

Still, there may be hesitation from publishers. One factor will be the cost of and the effort it would take to develop iPad content that truly utilizes its full capabilities of integrated media. Another is that the iPad-specific content will have to be strong enough so that readers don’t just use the device’s web browser to get the same content for free. At least three publishers — Hearst, Condé Nast, and Time — have done mockups of their magazines for tablet computers, although not necessarily for the iPad. Golf Digest presented a tablet version at last Thursday’s PGA Merchandise Show “with features like golf swings analyzed in motion, course reviews tied into social-networking tools, and equipment reviews with ‘buy-it-now’ buttons.”

Yet another reason for potential pause is that since the content will be sold through Apple’s iTunes Store, the publications will lose control over customer data. That data is now only given to Apple. The New York Times reports:

Magazine publishers, for example, maintain sophisticated databases about their customers, which lets them cross-sell products, renew subscriptions and entice advertisers with statistics about their wealthy readers. A big part of the business is automatic renewals charged to credit cards.

[…] However, Apple, which makes most of its money selling devices, not content, has shown itself in some cases to be a more benevolent warden of online content, than, say, Amazon.com. Unlike Amazon with the Kindle, Apple allows application makers to set their own prices; some, like The Financial Times, give away applications for the iPhone, but then bill customers directly for repeat use.

Although Jobs demonstrated at the launch event that the iPad will include an app for reading ebooks, it isn’t yet known if the device will include similar universal readers designed for magazines and textbooks.

On a related note, Caroline McCarthy, staff writer for CNET News, reported that all the buzz about the iPad unveiling Wednesday caused delays on Twitter. Tweets were showing up as much as 15 minutes late and Twitter was forced to temporarily disable lists and local trends in attempts to alleviate the problem. McCarthy noted that the dreaded “fail whale” did not appear, so it seems Twitter is growing enough to better handle information overload when big news breaks.