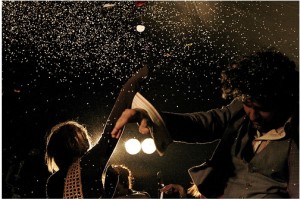 South by Southwest (SXSW), an annual set of interactive, film, and music festivals and conferences, is happening right now in Austin, Texas. The music portion launched yesterday, with 2,000 bands scheduled to perform over the span of five days. Prior to the start of the festival, SXSW sponsor AOL attempted to get interviews and bios for all of those 2,000 bands on its music site Spinner by offering $50 assignments through its “newsroom of the future” and freelance content site, Seed.

It’s an interesting idea, but AOL is attracting criticism for its efforts. For one thing, interviewers must use at least six questions from a template provided by Seed. Amy Philips, news editor for music website Pitchfork, says that while she thinks it’s great that AOL is investing so much money in music writing, “If they’re required questions, then you’re basically just asking people to do data entry for you. […] You’re basically just asking them to transcribe interviews.”

“I can say now,” said Seed programming director Saul Hansell, “that we basically accepted anyone who could write a coherent paragraph. It was mainly a test of ‘can you follow instructions.'” Leor Galil, music writer for True/Slant, says:

I’d go as far to say AOL’s found the equivalent of scabbing in online music journalism. It seems that as long as the content is there, who cares about the quality, right? I just hope this doesn’t become a trend elsewhere.

Hansell says that Seed has now published interviews with 80 percent of the bands performing at SXSW, despite a somewhat frantic email about missed deadlines that went out to contributors two days ago. You can check out the full list of Seed’s SXSW band interviews on AOL Music artist directory.

In a recent post on the Seed blog, Hansell also invited contributors to submit a “140/140 Close-Up” of SXSW. The submission consists of a 140-word description of a moment at the festival, a photograph that illustrates that moment, and a 140-word Twitter headline to accompany the first two. Seed is paying $10 for each submission it publishes. Hansell recommends use of the new Seed Mobile application for iPhone, Blackberry, or Android phones.

You can read our earlier coverage of Seed here.