A Look at Yelp, Part 2: Facebook and Google Closing In? 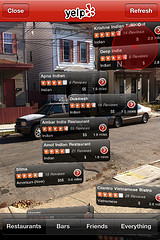 While heading out into the urban landscape, one can use a little augmented reality to navigate the best of the hole-in-the-wall restaurants or brilliant indy record stores. That’s why one of my single favorite aspects of Yelp is an app called Monocle.

As you can see in the picture to the left, you can look down the street through your smartphone’s camera, and Yelp will superimpose notes on the places that have been reviewed. The little circle in the corner of the screen gives an overhead overview of businesses around you, and, if you aim your phone straight down at the ground, it switches to an overhead map view. If you tap on one of the floating tags, it will take you to the full Yelp entry for the business with all of its info, ratings, and reviews.

Even if you post no reviews, or dislike geolocation and never actually check in anywhere, this facet of the app alone makes it worth having. I’ve actually discovered a number of hidden gems in my own neighborhood thanks to it.

So, once you’ve used Monocle to find a place to eat/shop/etc., we get to the interesting part. You see, checking in is trendy, just watch Twitter and see how many tweets run across your screen that are Yelp or Foursquare check-ins. Much like in a game, multiple check-ins at the same location are rewarded, although, at this point, the reward is mostly in the form of cutesy titles (“I’m the Mayor of Costco,” for instance). While it can offer convenience as far as locating nearby people on your friends list, the true value is wrapped up in a new feature we are told is debuting soon — the Check-In Offers.

Lisa Barrone, who does wonderful work over at Outspoken Media, noted this in her recent post for Small Business Trends:

On the Yelp blog, Luther Lowe didn’t give specifics but hinted that the review site would soon offer Yelp Check-In Offers to ‘help further bridge online discovery and online buying.’ According to the blog post, Check-In Offers will be different from Sales and Special Offers and will give users discounts when they check in to locations. As ReadWriteWeb stated last week, the check in feature does make a lot of sense for Yelp to incorporate. Yelp has always been a site dedicated to local discovery and matching users with SMBs. This seems like a very natural extension of that. While Luther didn’t offer many details, this will be a nice addition to the site.

Of course, while we wait for this to unroll, Facebook and Google are already stepping up to the plate with similar offerings. Facebook not only has an amazing user base already built in, but it also already has an extensive array of major brands involved: Starbucks, American Eagle, GAP, JC Penny, 24 Hour Fitness, and Macy’s, to name a few. As Barrone points out in her article:

And we’re not just talking about offering a free cup of coffee or pastry either. Some of these deals are surprisingly enticing. For example, Gap will give a free pair of jeans to the first 10,000 customers to claim the deal, and the San Francisco 49ers will offer 200 fans tickets for just $49.
When you combine the quality of the deals with the brands behind them and Facebook’s active 200 million mobile users a month, the power of Facebook Deals become quite evident. While FourSquare and Groupon have had a hard time attracting mainstream users, Facebook has already captured these folks. That gives them a great advantage in the mobile space.

Then there is yesterday’s debut of Google’s Hotpot, its new service that allows discovery and rating of local businesses. At a first glance it seems, as is often the case with Google efforts, to be lacking in the social area. Still, as Gina Trappani notes in her writeup of the service for Fast Company:

Lessons learned in the Buzz launch privacy kerfuffle are apparent in Hotpot: the app makes it clear at the start that your recommendations are public. You also set a custom image and profile name, which makes it easy to appear anonymous to others, even when you rate places using your regular Google account. Hotpot doesn’t automatically add your Gmail contacts to your friends list, either; it encourages you to add friends, but you must do so explicitly. That means in order to get the best part of Hotpot — the part where you see your friends liked the restaurant you’re considering going to for lunch — you’ve got to build yet another friends list.

And this is something I am very happy about. I think Buzz was once of the most grossly mishandled rollouts I’ve seen since Facebook’s Beacon. (It may take some extra effort to set up, but by the same token everything you do is not automatically broadcast to the world either.) Again, we have a vast existing user base for Google, but that does not translate automatically into a large user base for the new toy. Think Google Wave. Additionally, while laudable from a good business standpoint, the extra setup needed to use it will slow adoption. How much — we will have to see.

Scott Gilbertson of Webmonkey wrote a couple of days ago in Wired about the advantages Hotpot derives simply from being integrated into Google search:

Hotpot is also integrated into normal Google searches, as well. Just click the Places option in the list of filters and you see reviews and ratings from your friends alongside the familiar Yelp, Urbanspoon and other aggregated ratings.
The aggregated reviews are a win for Hotpot. The big difference between Yelp and Google Hotpot is volume — Yelp has hundreds of reviews for all the restaurants in my neighborhood written by loyal users. Google has a big enough database of user reviews, but it’s not as vibrant or extensive as Yelp’s.
But Hotpot gets around that limitation by culling reviews from around the web — in the case of restaurants, there’s Zagat, OpenTable, Gayot, Yelp, Blogspot and WordPress food blogs. Some places have a lot of Google user reviews, but Yelp usually has more.

I think this is one thing that will continue to be the case for some time. While Google may have tons of mindshare, Yelp has community, and community generates passion. As an avid supporter of the hyperlocal I can understand that passion very well, and I believe it will keep Yelp in the lead for awhile longer. I agree with Gilbertson — fusing Hotpot and Yelp would be perfect. That kind of search power combined with a thriving and rapidly expanding community would be ideal.