In an article for CNBC.com, Barbara Thau says that retailers’ social media efforts are currently being guided by attempts to remain local, mobile and authentic. She writes:

[…M]erchants are now tapping social media to cultivate a bond with — and even entertain — shoppers on an increasingly local level. They are reaching out to consumers on their smart phones and mobile devices.
They are also using social media to assert their distinct brand authority[…] 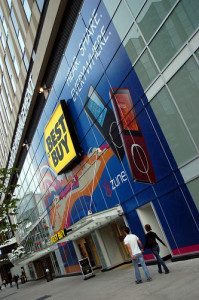 Although it’s difficult to find a correlation between social media presence and an increase in sales or customers, some of the more successful retailers are focusing simply on building community and customer loyalty. “Right now,” says eMarketer retail analyst Jeffrey Grau, “retailers are considered a success if they’re building a fan base and engaging consumers.”

* The Gap has launched an iPad app called 1969 Stream for its 1969 clothing and accessories line. The app features exclusive content from Gap designers, musicians and fashion insiders to create a “social commerce” environment for shoppers.

* Hot Topic has separate Facebook pages for many of its individual stores, set up by store managers. The chain uses these pages to focus on decentralized marketing.

Source: “Retailers Get Social With Their Customers,” CNBC.com, 04/21/10
Image by Ian Muttoo, used under its Creative Commons license.