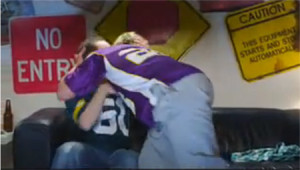 Jennifer Van Grove, an associate editor at Mashable who covers blogging and social media, recently wrote about the changing relationship between advertisers and the Super Bowl. Many advertisers have been ramping up their social media strategy rather than solely relying on paid airtime.

Some companies used social media to draw attention to commercials that had already been produced but CBS wouldn’t allow to air. Domain registrar and web hosting provider GoDaddy, notorious for its rather racy ads, put its “Lola” ad online after the CBS ban. ManCrunch, a dating site for gay men, has gotten a lot of attention after putting its banned ad online (screen capture from ad above).

Focus on the Family‘s pro-life spot featuring college football player Tim Tebow and his mom was one of the most talked about ads going into the Super Bowl. The difference is that the discussion wasn’t manufactured or instigated by Focus on the Family, and the ad hadn’t even been seen yet.

Some advertisers worked to generate buzz with social media tie-ins to the Super Bowl. Most used Facebook fan pages in some way, including Coca-Cola and Budweiser. Other advertisers, like Monster, developed Super Bowl-specific websites.

Other companies decided to skip the commercials altogether. Pepsi didn’t run a Super Bowl commercial for the first time in 23 years. Instead it is spending $20 million on a social media campaign called the Pepsi Refresh Project.

Instead of paying millions of dollars for 30 seconds of airtime, the soft drink giant is pouring resources into an online social-networking campaign designed to engage and interact with customers for months.
It’s a move that raised eyebrows among traditional media watchers, but social media experts say Pepsi has called the right play for a rapidly changing advertising game in which consumers are becoming the mass media that carry the message.

Pepsi will fund the most popular suggestions for ways to “refresh” local communities, selected by online voting. Some of the current top-ranked suggestions include sending Girl Scout cookies to troops overseas, using fresh produce from a local farmer’s market to fight childhood obesity in Illinois, and building a community playground for kids in Pierce County, Washington.